If we ever hopped that our one year of travel would give us plenty of time for physical and mental rest and more breathing room for writing, the beginning of our third week dashed our hopes completely. How could we possibly think that a transfer from pastoral peace of New Zealand’s South Island into the hectic urban tempo of Melbourne’s cultural hub would be easy?

Everything started with a very, very early flight from Christchurch. Getting up at 3 am and after four hours being disgorged onto lively streets of Victoria’s capital was unsettling, to say the least. We booked an Airbnb in the Fitzroy area, a very hip, if a bit grungy area, full of vegetarian and vegan restaurants with horizontals surfaces decorated with clever quotes and/or graffiti. We picked this particular Airbnb for the hosts— a gay couple who have a record number of 5 star reviews and offer a legendary breakfast. Seeing that we were novice, albeit absentee Airbnb hosts ourselves, we wanted to learn from the best. Indeed, the initial warm and extensive internet communication culminated in a personal reception worthy of long lost friends. Pastries, double cappuccino, metro passes and a long chat proved that the original concept of Airbnb where strangers shared a home, friendship and travel advice was indeed a good one. This was compounded by enthusiastic welcome from their dog Jordan, a fluffy ball with a stylish cut and color. 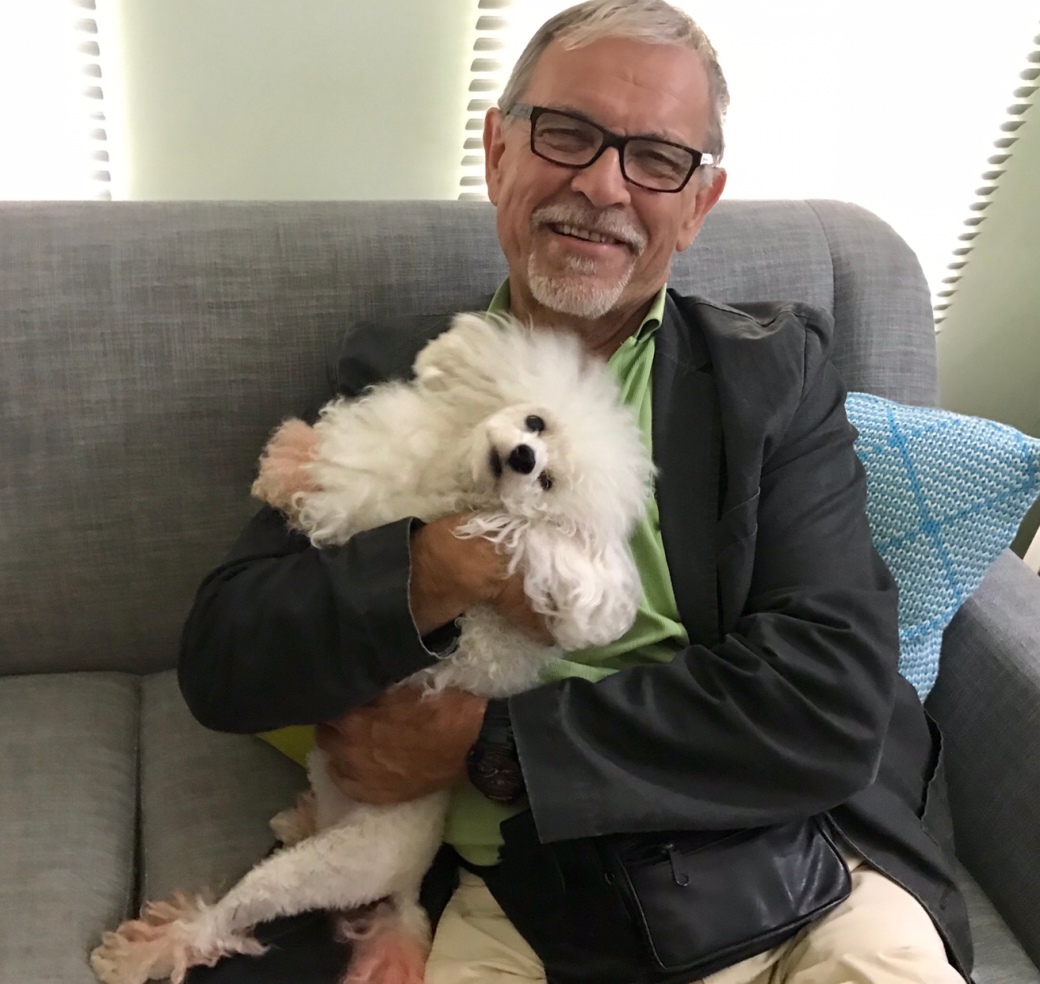 Sufficiently reinforced we braved the sticky warm weather of Victoria’s late summer on a long reconnaissance walk through Fitzroy. We found temporary shelter in a small gallery of the National Trust where we first came face to face with the modern Aboriginal art. Maybe it was a combination of the freezing air-conditioned air with the huge canvases of boldly colored organic forms, but we felt like we were smacked upside our brain. I was first introduced to this unique art form as a ten year old boy when my visiting aunt from Australia brought me a painted boomerang. The vivid colors and the white dots surrounding the kangaroo set me to dreaming of other places. Was this the beginning of my obsession with so called “primitive” art? The prehistoric rock paintings in the caves of Lascaux, the Sulawesi hand prints, the animals of Namibian San people—they all call to me with an old faintly familiar power. The Aboriginal paintings are even more attractive as they are created now, fresh and vibrant, connecting the ancestral past with the civilized present. There is a commonalty of shared tribal roots, but also individuality of each regional group or particular artist, the best quite easily recognizable for their unique style.

Elated we continued through the Downtown Districts ending by the Yarra River banks.

And there I innocently stumbled into a trap prepared in close coordination with a man neither of us has ever met before, a cousin of a friend of a friend called David, otherwise a theater producer for Melbourne Arts Center. By then I was toast and ready to collapse, but David’s embracing, warm personality and the cold Aussie beer he pressed into our sweaty hands at the Art Center’s watering hole, saved me. Rejuvenated with refreshing bubbles in our veins we embarked on a behind the scenes tour of the spectacular complex with the best private guide we could have wished for. David had been working at the Performing Arts Center for more than seventeen years and no door could stay unlocked as long as we wanted to know and see what was behind it. 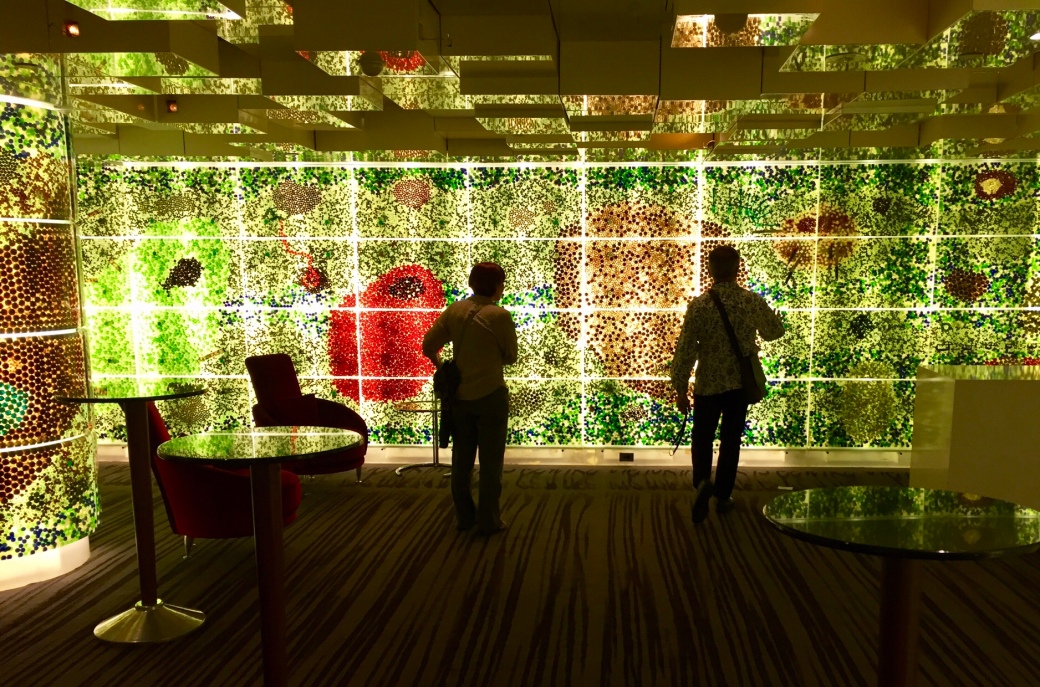 Ksenija with David admiring the glass painting at the Center (obviously inspired by the Aboriginal art).

This included the patron’s emerald gold meeting room with two Oscars (for the movie Camelot) left casually standing on a small table and the conductors’ private rehearsal room with an ink portrait of Yehudi Menuhin. The Center has three auditoria, the largest, with the capacity of 3,400 orange velvet seats, used for symphony concerts. The other two, one medium sized for 2,400 spectators and one small for 440, we also got to see in their full theatrical glory during the shows on the two consecutive evenings we had in Melbourne. 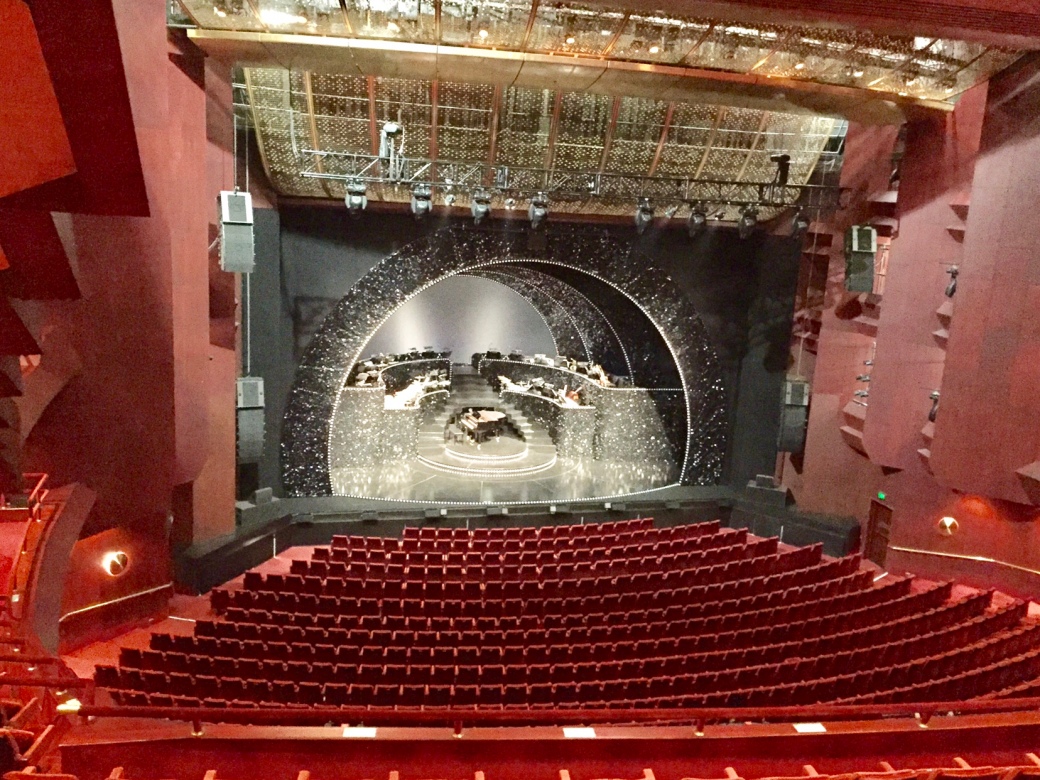 The set of Dream Lover

In the medium size venue we attended a more traditional show called “Dream Lover” about the life of pop singer Bobby Darin. If you are in the similar age bracket as I am, and most in the audience certainly were, I do not have to waste my and your time reminding you of the titles such as Mack the Knife or Dream Lover or Beyond the Sea. You probably hear the music in your head right now. What was surprising was that this show was still sold out after having been performed daily for more than three months. But Melbourne cannot be a place full of just old farts like me, right? There must be younger people going to the theater here! And you bet there are!After our extensive tour David took us to the staff cafeteria where we were introduced to the director of the show David was producing and then he ushered us through the back door to one of the last performances of the touring Irish troupe called “Riot”.

And here surrounded by a rowdy young crowd, I was completely unprepared for the cultural shock. Living the better part of my heterosexual adult life in San Francisco, I slowly, steadily got well adjusted to living side by side with gay and lesbian humans beings, without thinking too much about them, except for supporting their equal rights. I do not want to walk on the thin ice of political correctness here or being nice without being honest. Honestly. But in my busy world/life I do not remember of ever thinking or let alone encountering any transvestites!

The main star of Riot was a transvestite with original name of Rory O’Neil,  going by the stage name of Panti Bliss. Naturally tall he/she dominated the show. Not just because of additional help of 8-inch high red heels in which he effortlessly strutted on stage and floated smoothly down stairs and aisles to interact with people in the audience, occasionally sitting in their laps. I am afraid my English was not good enough to catch all of his/her comments/jokes/critiques/political commentaries. But Rory’s/Panti’s monologue on destiny and his/her childhood dream of becoming Farrah Fawcett was the top performance of the evening. He/she implored everyone to follow our dreams even if they are as outrageous as becoming Farrah “Fucking” Fawcett. Funny, witty, hilarious, moving. Strangely, I did not know if I should be laughing, screaming, or crying. What the heck is going on with me?! I came a long way, baby. I was mesmerized by a transvestite! I liked and felt for him/her. Yup, she is now Farrah “Fucking” Fawcett even for me and for the rest of my life!

After the show, standing in front of the poster with Farrah “Fucking” Fawcett in the lobby of the Melbourne Art Center.

Still full of impressions, it did not feel right to just go home. We waited for David and joined a few of his friends at the Art Center’s bar for a night cap. A few glasses of local champagne. It tasted like sweet prosecco and felt like a cold shower. It helped. It seemed that we were all touched by the depth of Panti’s performance. Our conversation quickly strayed into human interactions and the pain humans can inflict on each other. We talked about the Australian gay and lesbian citizens finally, just recently, gaining the right to marry. We talked about the terrible treatment of Australian Aborigines by white settlers, usually a sensitive topic. I brought up the incredibly well done exhibit in Wellington Museum on the battle of Gallipoli, the best war exhibit I ever saw. Their larger than life and true to life figures or real people in the war and the animation of what different types of artillery shrapnel can do to human body or what pain an attending nurse feels reading the letter home from a soldier who perished in the trenches reduced me to tears. Very uplifting end of the day, indeed.

And then it was time to go home. Our home away from home, our charming, lovingly tended, disgustingly, spotlessly, you can eat from the floor, clean AirBnB, with the level of cleanliness we aspired to for the last 30 years, but never achieved in our own home. Dropping to our bed physically and emotionally exhausted and being woken up by the beautiful smell of bacon the other half of our hosting couple is preparing downstairs in the kitchen.

“Are you getting married guys?”.

And then comes the story of death threats sent from Indonesia by a Muslim couple upon discovering during their recent stay that their hosts were, after all, a gay couple.

9 thoughts on “Cultural and Other Shocks in Melbourne”