In 6th grade I had this fantastic history teacher. I don’t remember her real name, but due to her exotic looks and lustrous black hair always combed back and fastened in a bun, we called her The Indian. She really knew how to bring history to life and it was Egyptian history that was her biggest love.

I was totally mesmerized by the colorful and mystical stories about Egyptian pharaohs, gods and goddesses, pyramids, and temples. 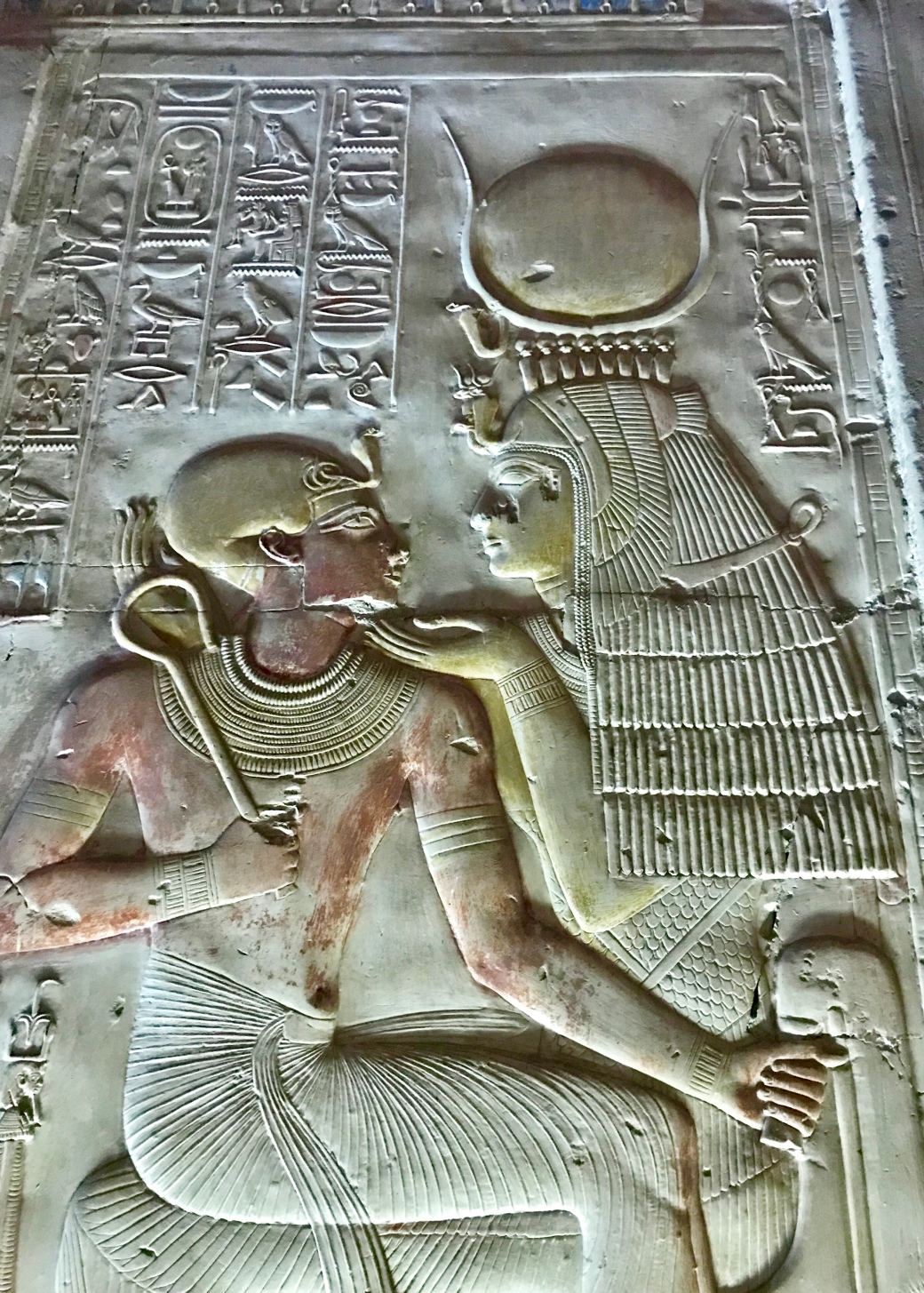 Years later I went on to study art history and history in college.

I wish it hadn’t taken me so long to see all these treasures in person and I could have told my teacher how she had enriched and influenced my life with that first history lesson.

In truth this is my second time in Egypt. Almost 35 years ago Mirek and I stopped in Cairo on our honeymoon to East Africa. But it was just a one night stop over to take a quick peek at the Pyramids.

At the time I remember thinking they were rather plain looking and not that impressive, but now that we are spending two weeks in the country I find that day by day I am more impressed by the technical and artistic skills of Ancient Egypt and my Egyptian fascination continues to grow.

Knowing how overwhelming Egypt can be, what with the traffic, incessant hawkers, heat and myriads of monuments we opted not to do everything on our own as per usual, but to rely on a steady dose of professional drivers and guides. It had proven a really good idea. Not only do they protect you from the onslaught of all sorts of people desperately trying to make a living from the grossly diminished numbers of tourists, they efficiently get you to a number of places and strategically position you at the right corners to have the best views. And of course they point at and tell the great Egyptian stories of kingdoms and gods. Last but not least they know good local places to eat.

I made a special request that whenever possible we get a woman guide. Even Mirek admitted it was strike of genius and the three women guides each gave us their life story and a unique insight into the position of women in modern Egypt. (Those revelations in the next blog-stay tuned).

We figured two weeks was way too little to do any more than the top three: Cairo with the Giza Pyramids, Aswan with the dam and Abu Simbel, and the Nile with Luxor. Of course, we quickly figured out that we had way too little time to even scratch the surface (of the desert).

Our little hotel in Giza was chosen for a great position right across from the Pyramids. 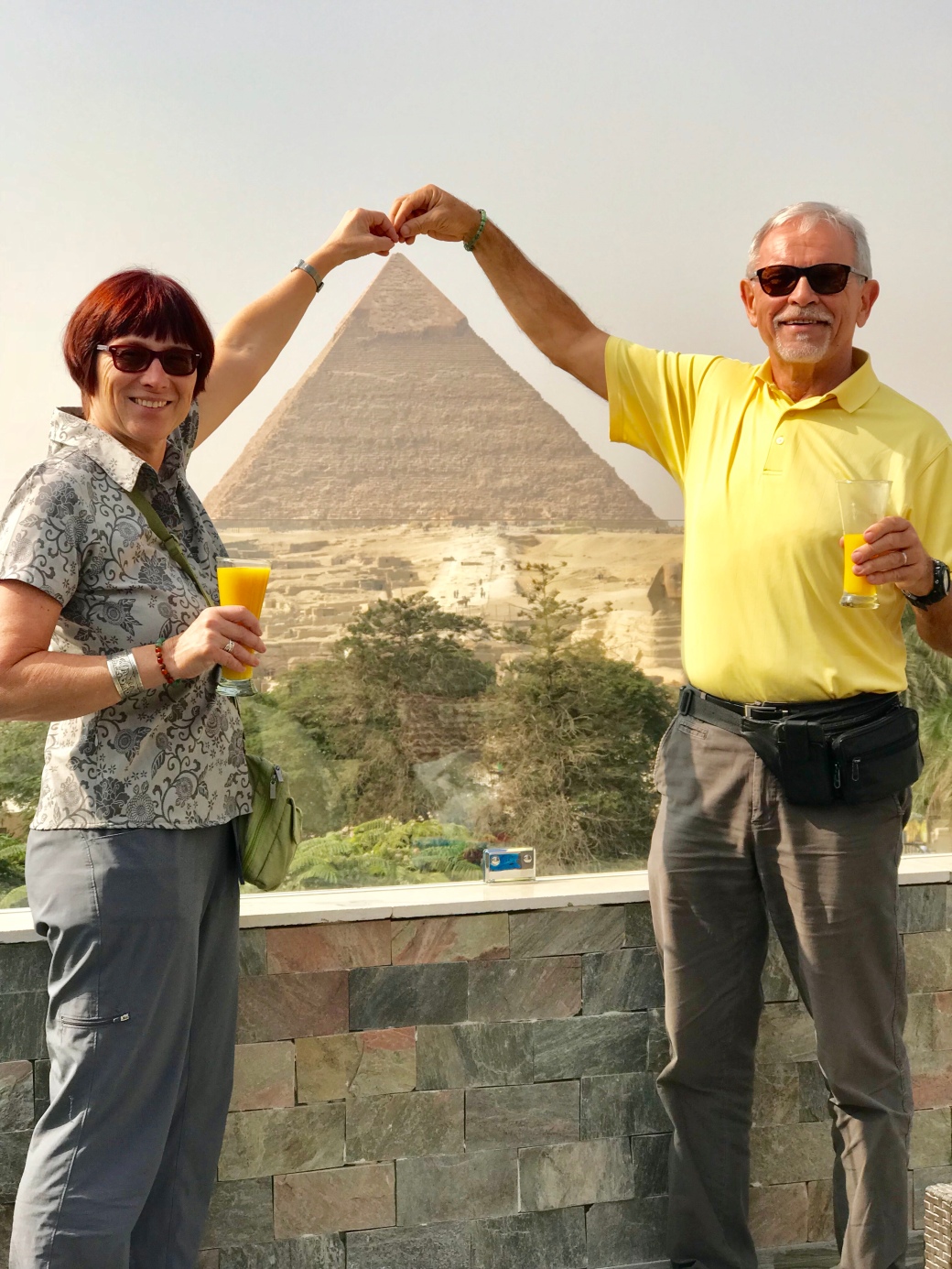 Every morning and evening we had our fill of all three Pyramids and the sphinx from the rooftop terrace, including a free Sound and Light show while sipping a beer before bed.

This vantage point also gave us a closer look into the other side of tourism. Early morning and late at night we could see the gathering of camels and horses catering to tourists led by their owners and handlers. In the alley next to our little hotel a boy of no more than 9 was shoveling camel dung instead of going to school.

In the corner just opposite a big heap of garbage was regularly picked through by different people. One morning a fight broke out when a man with a horse cart tried to take out some recyclables. Another man in a traditional white galabiya came at him with a thick stick. Quickly the local police appeared and shoved off the cursing man with the horse cart. Not a pretty sight, and one that tourists would prefer to miss. But as always we try to take the bad with the good and want to understand what real life is about. We ask probing questions and accept invitations from drivers and guides to have tea in their modest homes with their

families. Life is far from easy after the Arab spring revolution, prices have gone very much up and tourism very much down. But there is a glimmer of hope this year with more tourists returning. While we still enjoyed some sites in perfect solitude, some were already quite inundated with large tour group buses.
November is the beginning of the season, the weather ideal, with warm sun, but no scorching heat and no snow like in Europe or another bad fire like in California.

It is nearly impossible to choose just a few representative photos from the hundreds upon hundreds we have taken in Egypt so far. It is amazing how $2.99 a month iCloud storage can suppress your best intentions to control your creativity when your iPhone memory limits are lifted.

The best intentions, too, of not climbing on a camel for a silly tourist shot

are overpowered by the salesmanship of the camel handler.

Years back I tried to see Tut’s funeral mask in San Francisco’s de Young museum, but the advertising poster was a scam. 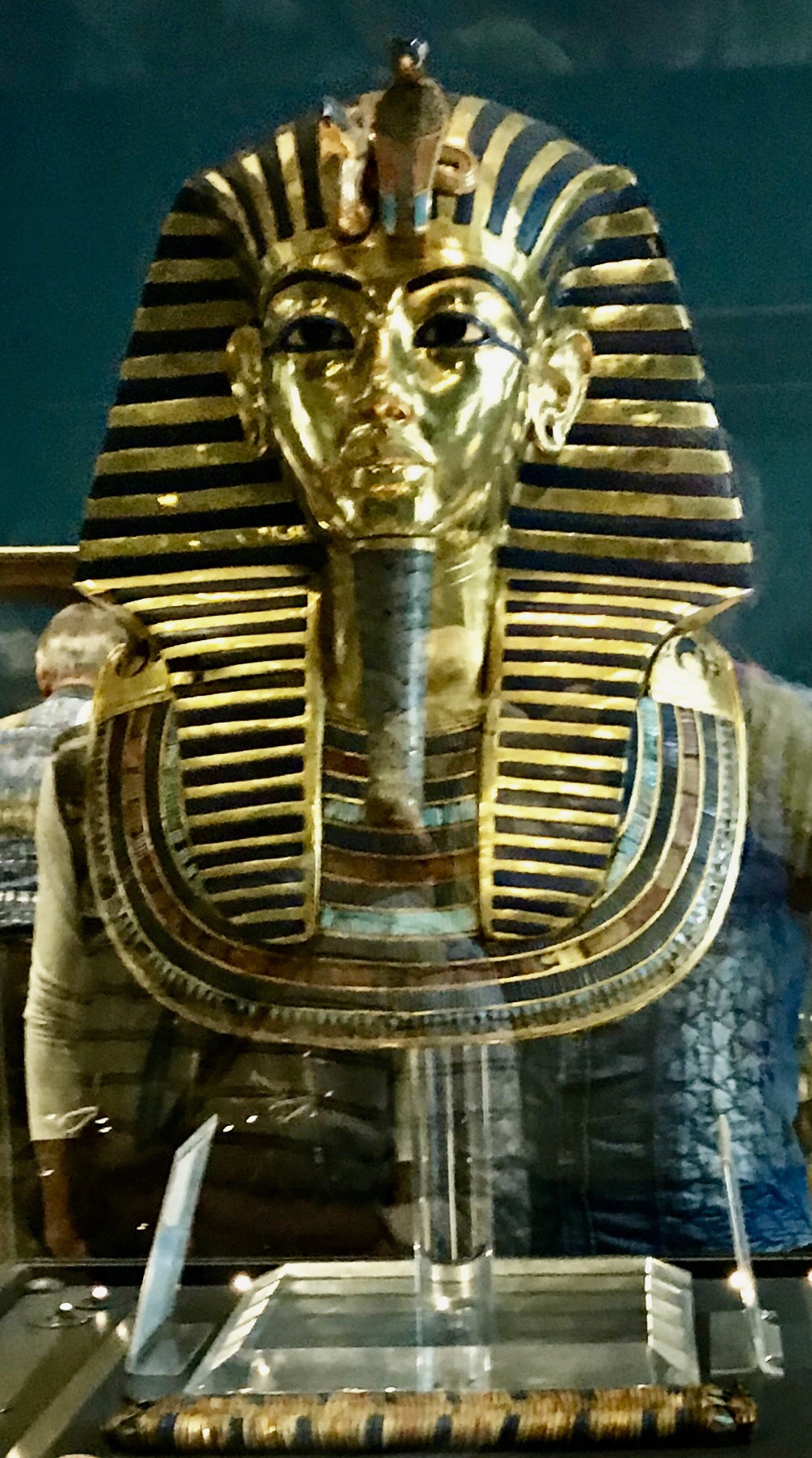 It is interesting what 25 pounds of pure gold and archeologist Howard Carter’s smart marketing can do for the fame of a young man who died some 4,500 years ago! Finally, we made it for the real deal in the Egyptian Museum in Cairo! And together with us thousands of others trying to scramble literally over thousands of artifacts lying willy-nilly on shelves and floors. This is hands down one of the worst museums we have ever been to, which is a shame considering the amount of treasures they have.

From crazy Cairo we flew to Aswan, a quiet, but colorful spot on the Nile, at the edge of ancient Nubia, where the color of skin is darker and the features more beautiful. Nubians are still mavericks of sailing and we spend a few dreamy, late afternoon hours on a felucca with its charming captain.

Abu Simbel Temple is barely 50 miles from Egyptian border with Sudan. After a few thousand years left in peace, Ramses II and his lovely wife Nefertari watching over the River Nile cataracts UNESCO lifted both temples from the location being flooded by rising water of new Lake Nasser in the mid 1960’s when the huge Aswan dam was built.

Finding out that police convoys at 4 am were not obligatory any more, we hired a driver and guide and started of after breakfast. Thus we arrived after the few early bird visitors turned back home and had, like in Lebanese Baalbek, this stunning top notch historical place all for ourselves!

We always dreamed of floating down the Nile to Luxor and we managed to score a last minute deal on a quite luxurious cruise ship Royal Lily. A little luxury

at our age is not a bad thing and it is indeed an easy way to travel with stops on the way to see more beautiful temples. Still, two days was enough to reassert our motto of being too old to backpack, but too young to cruise.
How many temples can you see, before they all become a blur? It is difficult to decide which is a favorite, because they all have something special of their own.
The only temple by a female pharaoh Hatshepsut is the most impressive regarding its size and exceptional setting. Carved out of the rock at the end of the desert valley west of Luxor its inner beauty and artistic refinement were destroyed by the next pharaoh but its sight from the distance is certainly breathtaking!

But bigger is not always better. Some smaller temples like this one at Philae are lovely and perfect.

But what you can see IN some of those tombs, and sometimes in the most strikingly stunning colors is really exceptional. How on earth could these colors have survived for so long?

It does make you a little bit suspicious that the Government Department of Antiquities engages young Egyptian artists in repainting some of the frescoes overnight for the new daily batch of tourists!

When the day is done you have a chance to enjoy more illuminated temples in the night.

Yesterday in the late afternoon my glass of patience with all those temples of Egypt overflew and I stated, maybe clearly, but still carefully, that I can hardly see even one more. As a result the leader of our expedition decided wisely to go instead into the air 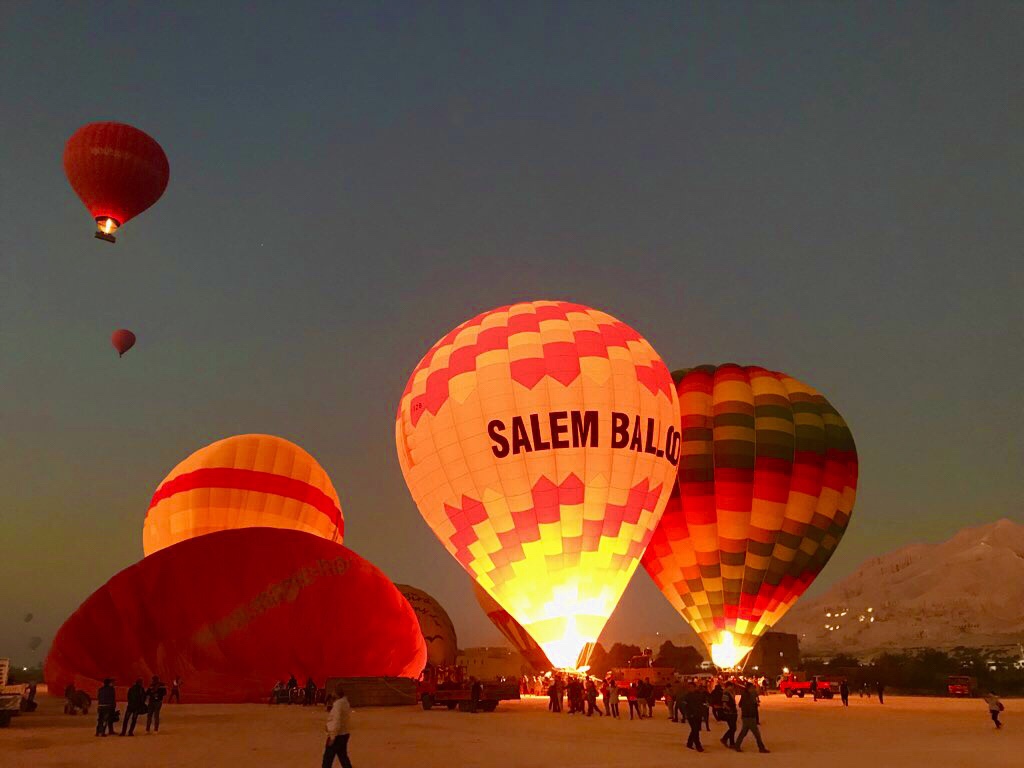 and in one early morning hour see all the rest of the temples in one bold stroke. It did require a 4 am wake up call and a quick river crossing to the lift–off site on the West Bank, but it was a lot of fun. As a positive outcome of this smart decision we have been lying at the swimming pool all day long while thinking independently what would be our mutually agreeable venue for dinner.

This I would call a relaxing travel day at its best.

5 thoughts on “Temple Temptations in Egypt”