The trip to North East India is not for soft cookies. 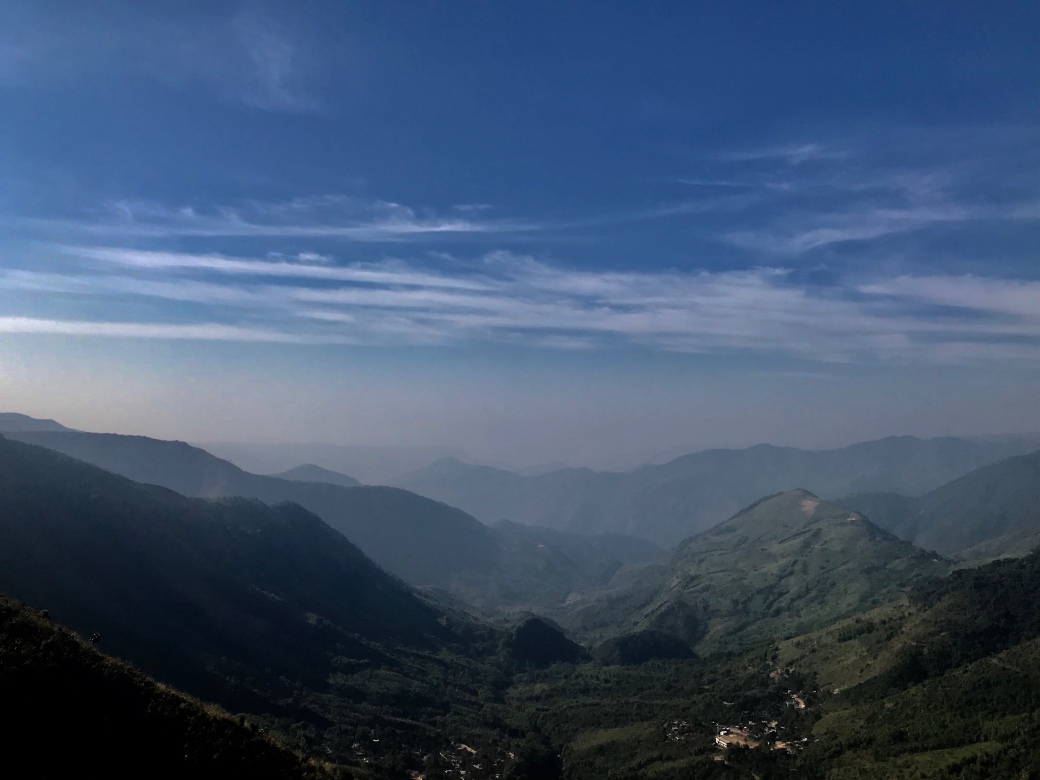 As you are kicking over the few fellow travelers (some of them singles) some of whom have been spending more than a year braving bad roads of South Asia moving exclusively by PUBLIC transportation through jungle, crazy overpopulated cities, public strikes, humid heat or even a surprising spell of cold and rain we have just encountered you start wondering how much we have softened in our motto “Too old to backpack, too young to cruise!”. We have hired an English speaking guide, a safe driver, both local, but of Nepali Gurkha descent, and a pretty comfortable Toyota Inova! But then we planned on only a 16 day circuit, covering an area where distances are not measured in kilometers or miles but in hours. Here on a good day 30km/18miles can take 2 or 3 hours of bumps over sharp rocks, sways in and out of big potholes and slides in the fresh, squishy mud.

the map showing the NE “appendix” of India, squeezed between Bhutan, Tibet and China in the north, Myanmar (Burma) in the east and Bangladesh in the south, with only a narrow strip of land connecting it with the rest of the “motherland” in the west.

We started our adventure by flying as the only white faces on the plane into Guwahati, the capital of Assam, the economic heart of this region. With great relief we spotted easily the only man with a white piece of paper (bearing our name) and without hesitation, we jumped into our hired car traveling south. Quite soon we encountered the first vast green Assam tea plantations. 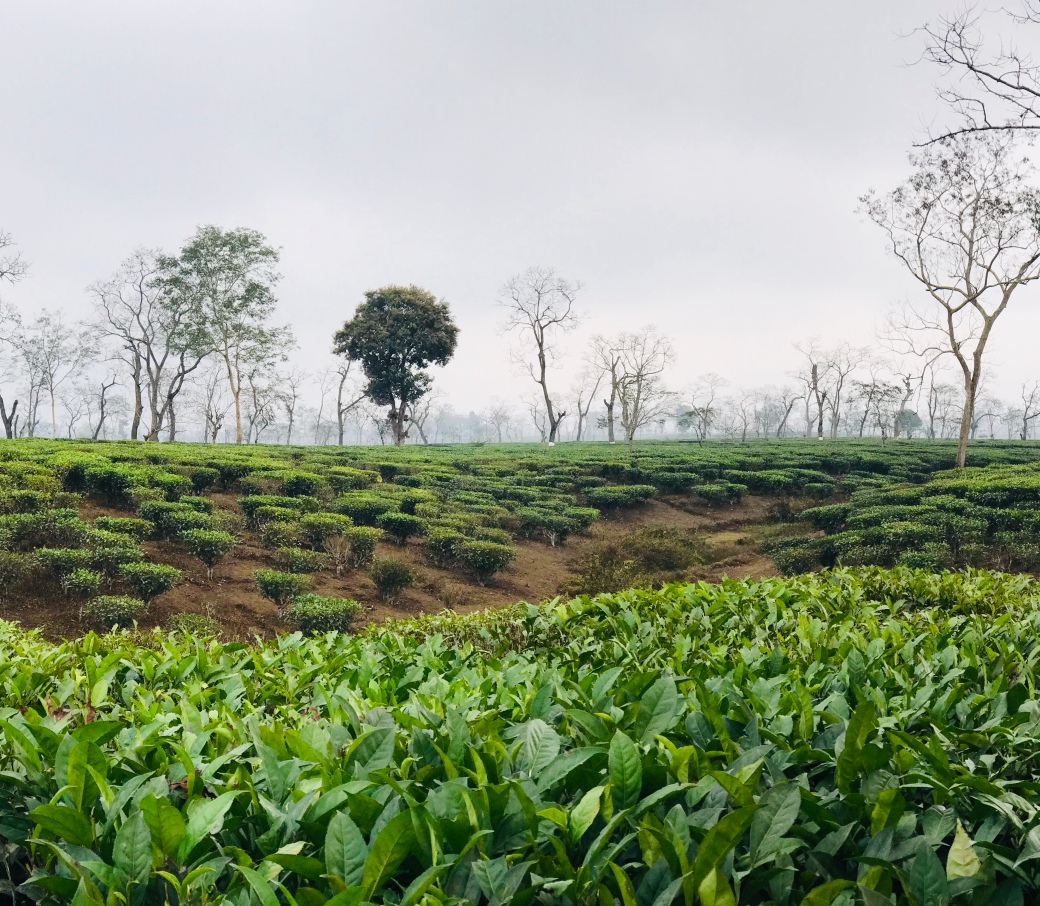 Our first overnight was in the mountains at the old British hill station of Shillong. The vestiges of colonial villas 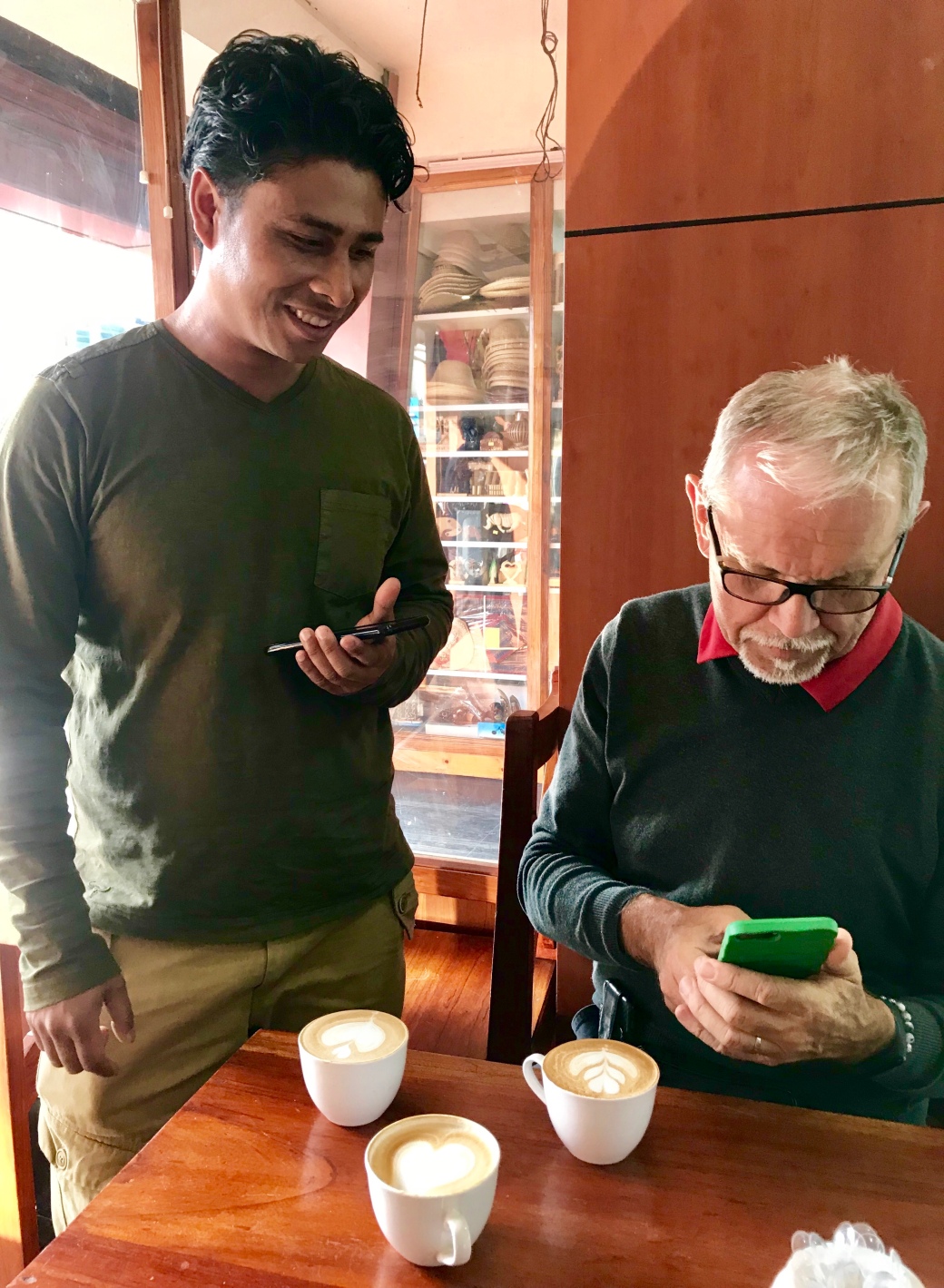 with a fantastic cappuccino made from tribally grown coffee. After the overnight haul it was just what the doctor ordered!

The next morning we pressed on into the heart of the State of Meghalaya and before noon we stood on the Bangladeshi border. 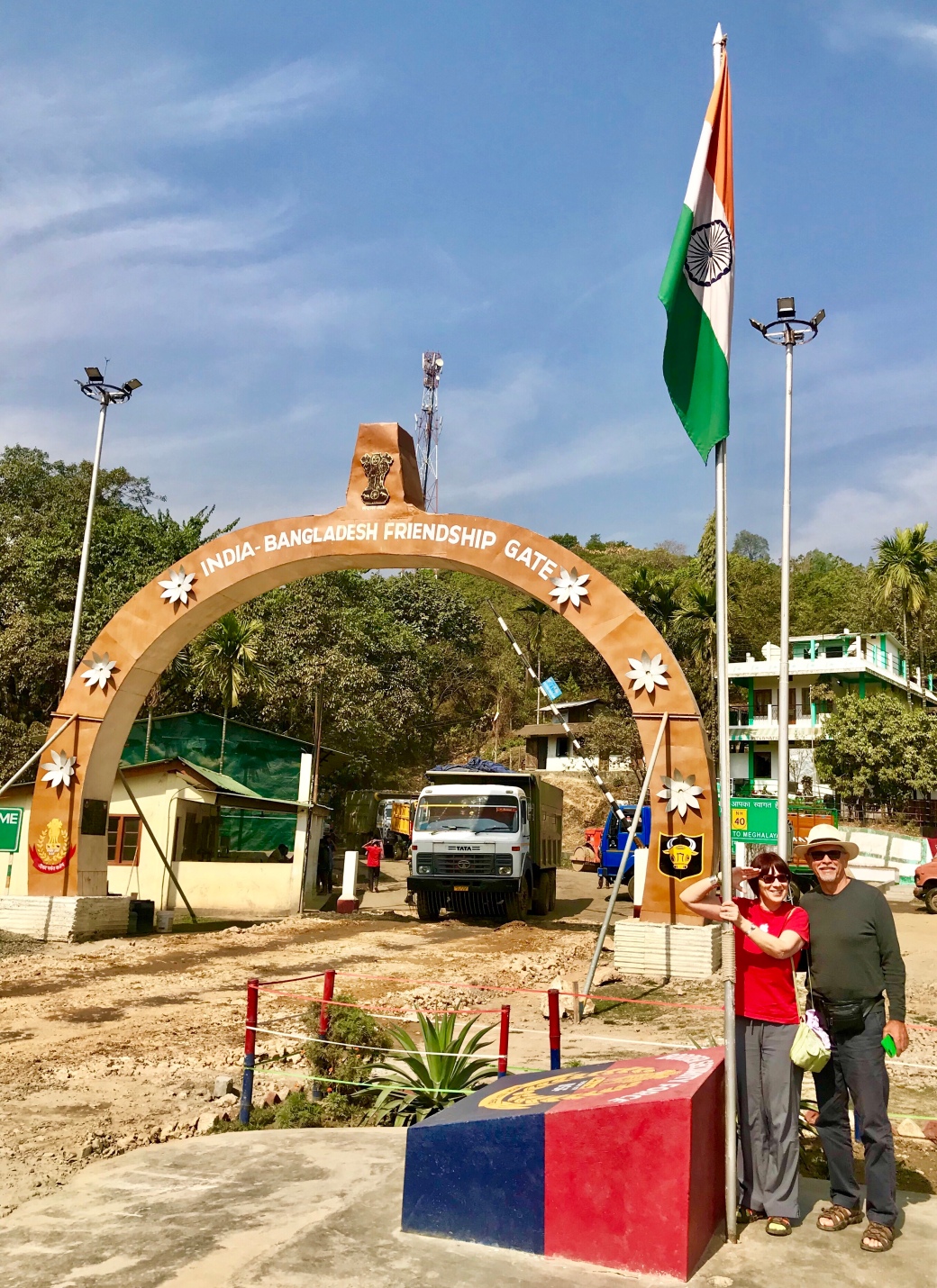 Don’t get misled by our smiles and the blatant lie on the border-marking arch saying something about FRIENDSHIP. Frequent checkpoints and plenty of soldiers armed with Kalashnikoffs, especially on the Indian side, indicated otherwise.

Our Expedition Leader did not hesitate a second 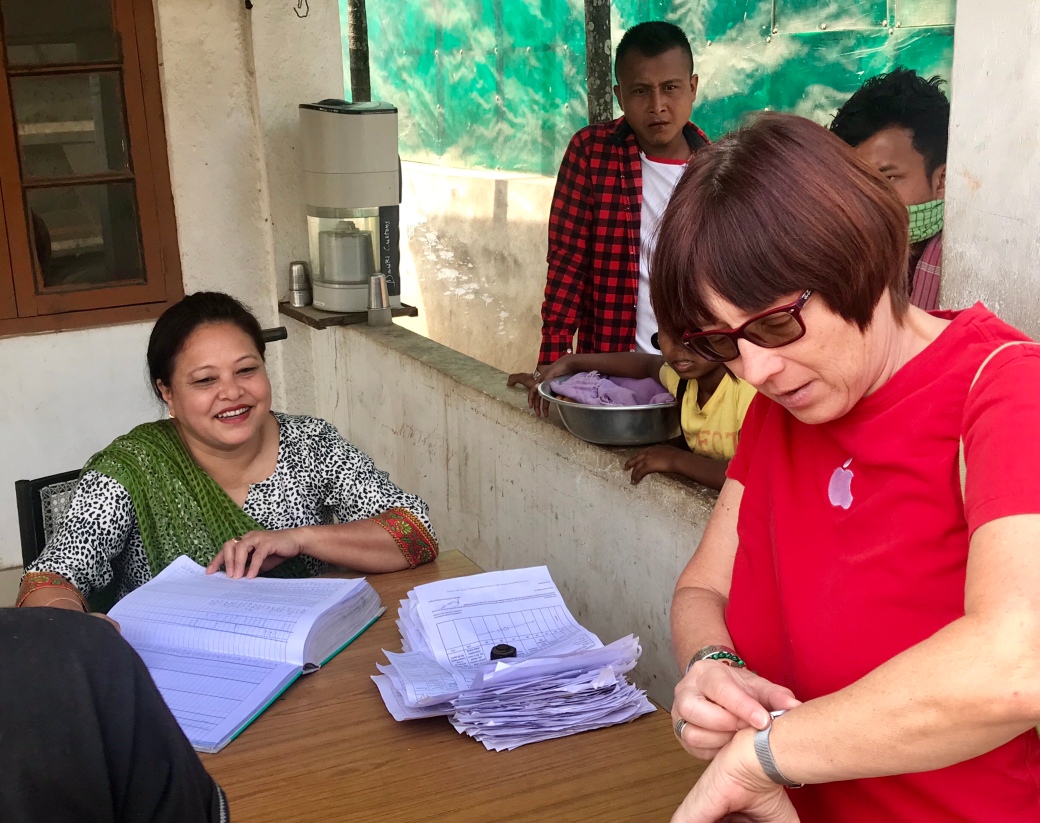 to educate the immigration and custom officers on plenty of possible improvements in their work and time management, so that otherwise messy process of border crossing would become smooth beyond recognition in matter of minutes.

In the meantime the local populations enhanced their cross border friendship by sharing the river and the riverbank with a tiny stripe of no man’s land in between controlled by border guards with whistles. The washing ladies in this case are Indian and the crowds behind them are Bangladeshi tourists. No kidding! 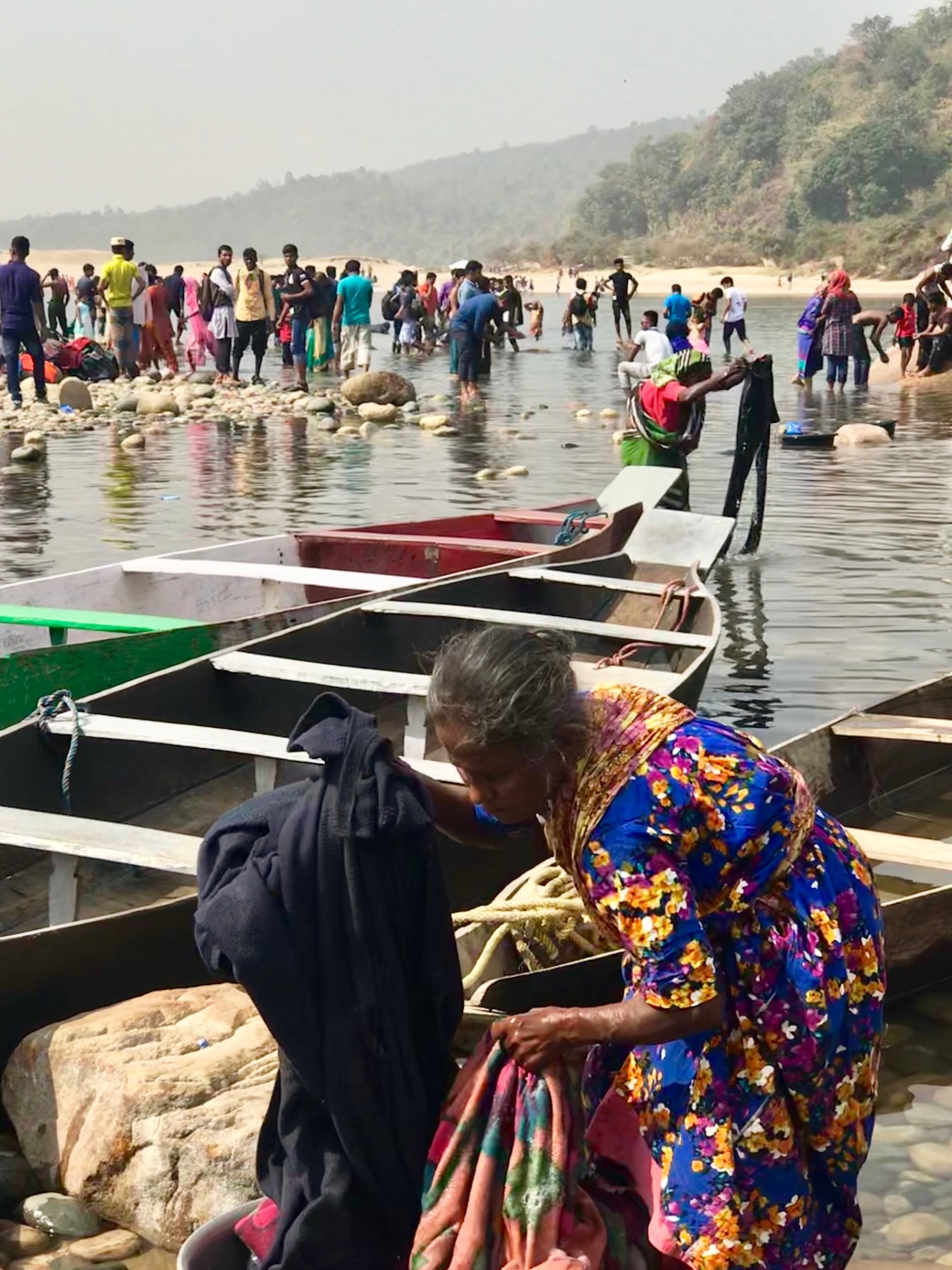 Our third State, the northernmost sparsely populated Arunachal Pradesh, brought us close to China. Here no breath is wasted on friendly words, as China considers the northern tribes their “brothers” (like they do Tibetans so locals have something to look forward to!) and already made a military incursion into India here once. Our own movement was rather limited by rain and atrocious roads made more atrocious by said rain. The conditions of local bridges were of big concern to our resident engineer,

and were on occasion personally inspected.

All in all it was abundantly clear that we were quite safely stuck behind the main range of Himalayas. Truth be told we did have a feeling on entering this State with nary a sari in sight that the members of the local Apa Tani and Nyishi tribes did look a lot more like Tibetans than typical Indian citizen we know. Even from reading some history of trade relations, we learned both tribes have had quite extensive contacts with their northern neighbors but….we can hardly be called experts on this issue and certainly do not want to start another war between those two giants of the global market, when plenty of money and national pride is involved on both sides.

And hospitality industry standards in Aranuchal? It is hard to say. What hotels?

We even spent one night in this tented Nameri Ecco camp. Otherwise all hotels have running hot water… there is always someone available to run in with a bucket of hot water!

In spite of the primitive conditions, we found the food in Arunachal quite good, as everywhere else in India and I was more than happy to even find excellent pork dishes. The grilled pork in the ABC Restaurant in the city of Itanagar can be highly recommended, just in case anyone would dare to follow in our footsteps. Just don’t loose your wallet down the toilet, like I did!!

On the positive side our digestive tracts were intact for the duration of the Indian trip, which is considered as rare a miracle as Immaculate conception. It must have been for the prudent avoidance of more delectable local specialties like these wriggly grubs.

The lack of suitable hotels was compensated by the lucky strike in finding a home stay in the village of Ziro with a sweet tribal couple called Punyo and Kaka. 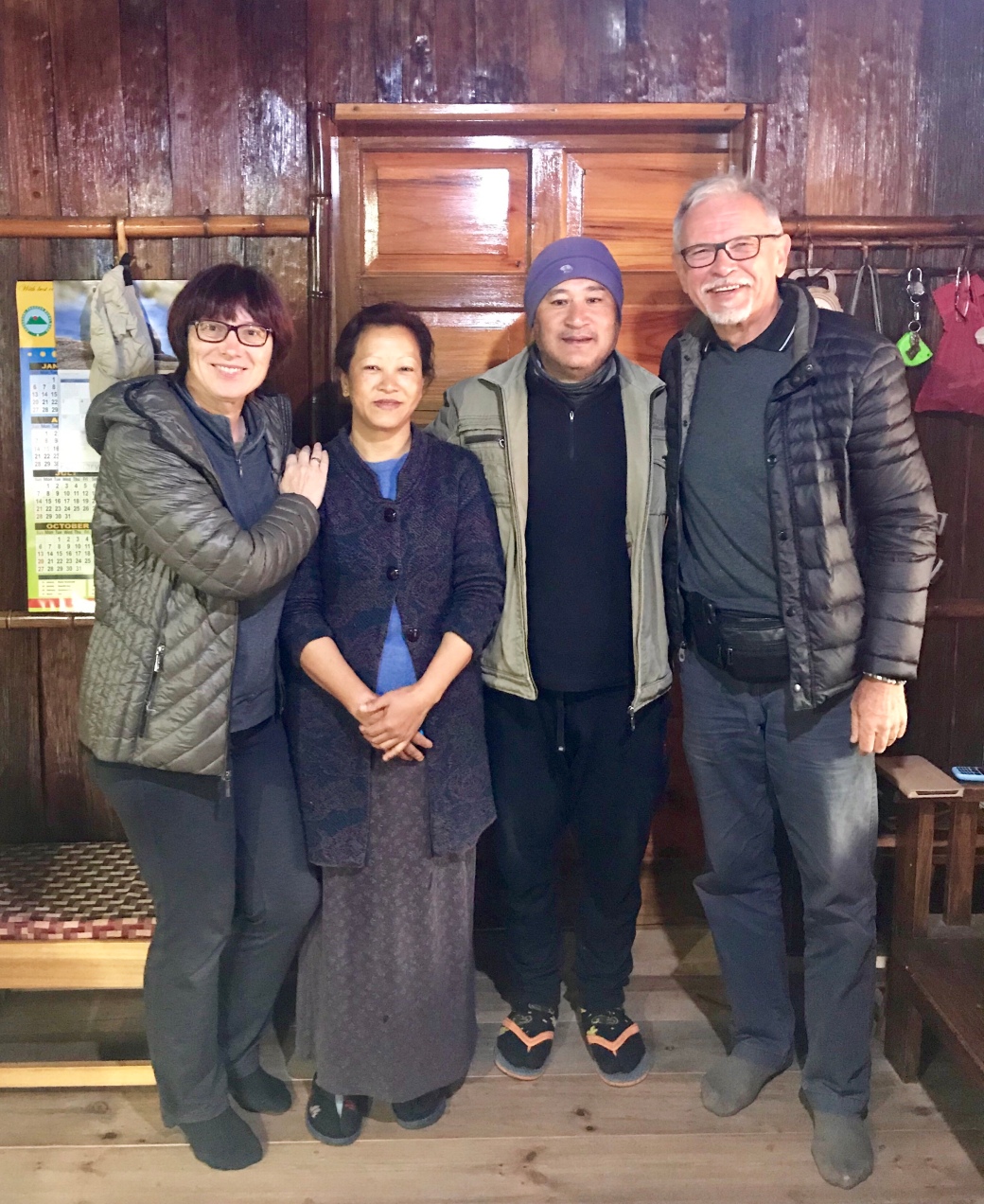 In their cozy home stay you can truly feel like at home away from home!

It was not just clean, simple, comfortable accommodation, tasty breakfasts and dinners but the company of this wonderful couple and discussion we had around the fireplace over their own produced local wine!!! 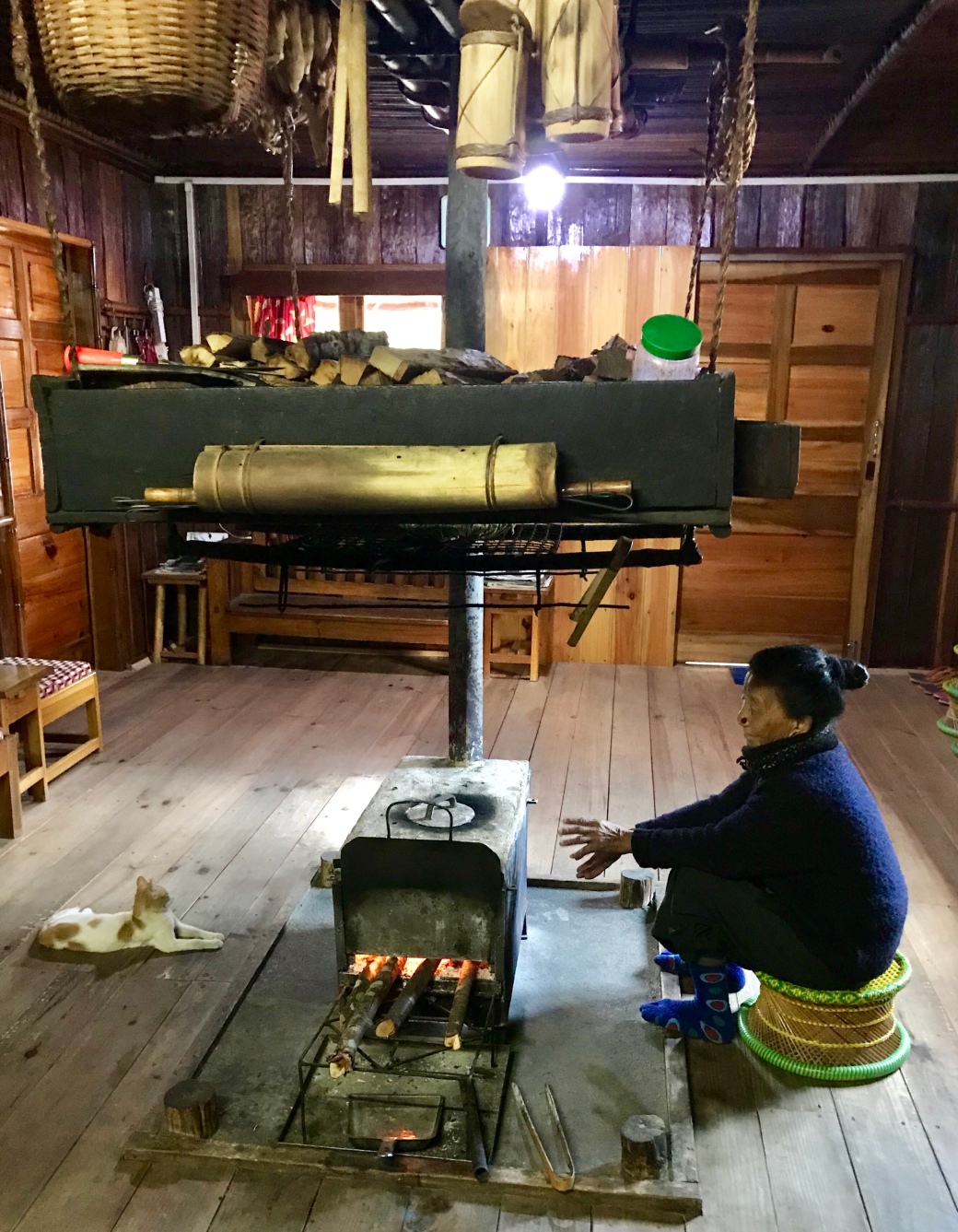 I even forgot to open a reserve bottle of my favorite Indian lager, the famous Kingfisher beer, as my mental capacity and speaking capability were unquestionably affected by their “moonshine nectar”.

River. On the photo you can see our first ferry to Majuli Island. Some say it is the largest riverine island in Asia or even, according to industry’s more aggressive marketing people, in the world. The process of boarding a huge crowd of people, motorcycles, bicycles, and our car onto the rather small boat brought uneasy memories of all those news of Asian ferries capsizing while invariably overloaded by goods and people. We might have hoped the crew will not allow all of them to board this ship. Fortunately or not, our hopes were not heard by whatever Gods may have been involved in this transportation “miracle” as the crew after a lot of rearranging made it happen and squeezed everybody and everything onto this “ferry”. To our surprise we disembarked on Majuli Island with a loud sigh of relief, just to enjoy the rest of the day searching in the rain for the reserved accommodation on the riverbank. As we found it in the dark only, the morning brought that much more of a sweet surprise.

Starting the second half of our adventure, we finally reached the easternmost point of our trip by walking across the Burmese border! No matter how many check points we had to pass on our way to the last Indian village of Lungwa located on the map at the point shared by Myanmar and two Indian States, Arunachal Pradesh and Nagaland, the locals enjoyed a booming international trade in whatever trade items could be found in demand on the other side of the border! Be it a shared photo with locals taken by tourists or 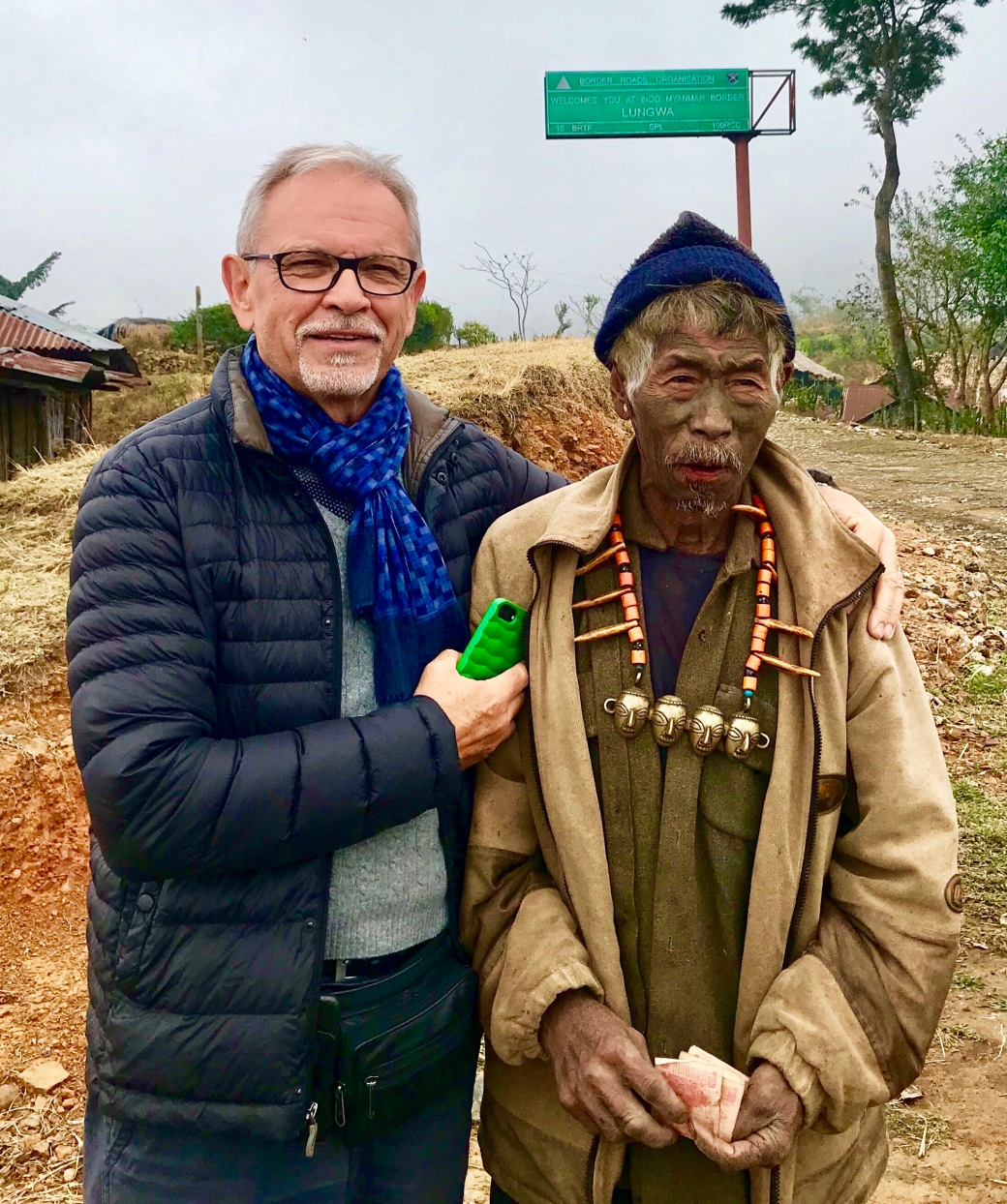 just a few sticks of firewood 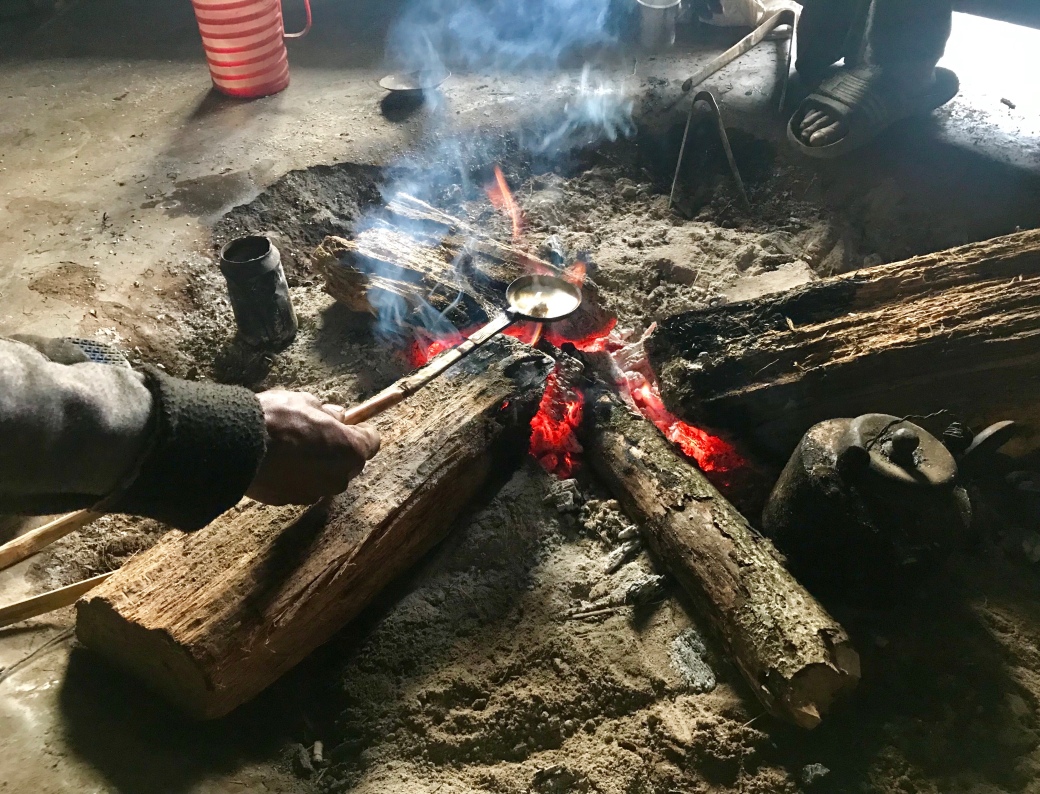 here prepared for the local tribal Angh (Leader), who seems to be continually under the influence of this strong substance. (Btw introduced by Britishers… but that is a story for another time).

Not exactly being interested in this kind of trade, we still contributed to local cash flow in spite of the limited space in our luggage. The prices for local tribal art were way too attractive, so the deal was sealed by a hand shake 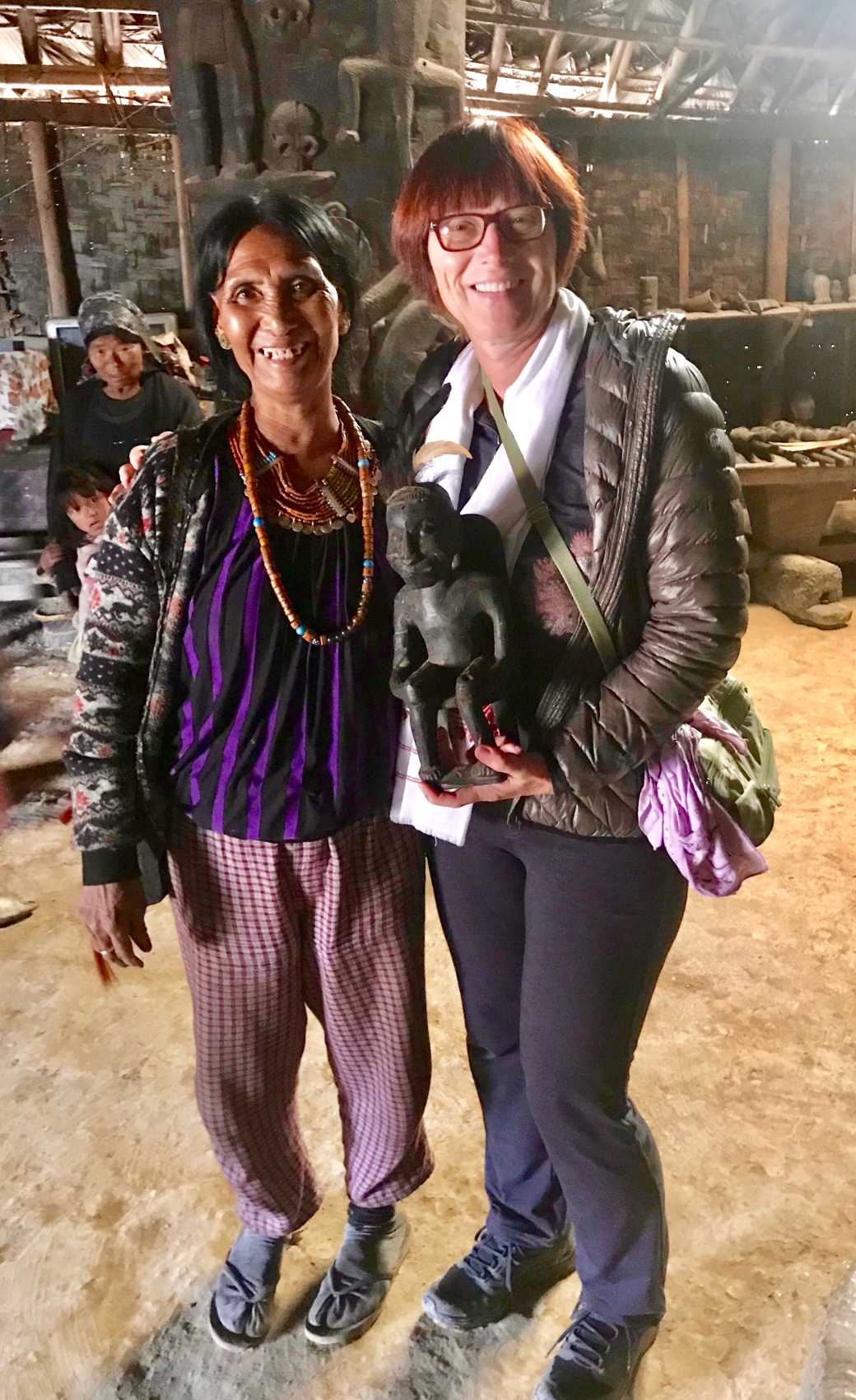 and a photo between both parties involved. We might need to discard some pieces of underwear to fit it in!

Some of you reading this report may feel a little bit uneasy about travel through such remote locations being safe. But you do not have to be overly concerned about our safety. There is always someone from the local tribesmen who will kindly take you under his wings!

P.S. In case you are planing a trip to the tribes we highly recommend hiring a driver and guide through http://www.theholidayscout.com. Couldn’t have done it without them!

10 thoughts on “Not Quite India – North East Tribal Areas”