or peeking down a narrow alley

or even just driving past a large house wall,

chances are that some kind of whimsical graffiti will greet you. No ugly tagging that mars the buildings, only funny or sweet or artistic renderings that enhance them and actually bring tourists to admire them and of course take selfies in front of them.

If anything, I really, really liked the street art in Malaya, also known as Peninsular Malaysia, to distinguish it from the Eastern half with much wilder Sabah and Sarawak on the Malaysian half of Borneo. We were there years back looking for the last descendants of headhunting Dayaks and stinky giant Rafflesia flowers and cute orange jungle orangutans. That was exciting!

The more sedate Peninsular Malaysia was not on my bucket list, so I kinda left it to my co-director to take the lead on what to do and see there. He bought the flight to Kuala Lumpur and booked the rental car and then said, “I think we will just wing it.”

I am not good at winging it. I like to have a plan. I like to have done my homework. If I don’t have a guidebook or two, at least I do the research on the internet, reading some blogs, finding top sights recommendations, driving itineraries and hotel possibilities.

I get quite nervous if at 5 pm I don’t know where I will sleep that night. So instead of embracing the unknown, hurtling down the wrong side of the road I am oblivious to the sights outside the car window, browsing on my iPhone, alternating between driving directions and Booking.com. I am sorting through the maps and pamphlets I picked up at the airport’s tourist information center. There are too many hotels and too many reviews for each. And I am not even looking at Airbnbs, the hotels are so affordable and so nice, I just stick to those. Any bigger city will have on average 300. I am inputting filters and saving the favorites.

The first reservation I make in this state of mind in Malacca turns out to be for the whole month ahead in a hotel that is fully booked when we arrive to check in. They kindly send us down the road to a hotel that is half the price and still really nice.

As the days pass I become a little more relaxed. I bookmark a few 3* hotels with 8.0 and up rating the night before or on a long empty stretch of the road (thank goodness for T Mobile free unlimited international roaming) and then towards the evening decide which one we will drive to. The prices often get slashed further as the day progresses with last minute deals and the Genius (frequent booker) discount often giving us an additional 10% off. When we get to the reception we ask for a walk in rate, and if it is not cheaper than on Booking.com we book online on the spot. I learn it is perfectly fine to save a few bucks for a room without a window, as we will only sleep there anyways, but it is better to pay a few extra bucks for a room that includes breakfast, so we don’t have to leave on an empty stomach, immediately having to look for food.

We find that the range of $25-$45 gives us incredibly good, modern and clean accommodations. The most we pay is $50 at Abdul’s Chalets for a beach cottage on Perhentian island.

Originally there was no plan to go to Perhentian Islands, but winging it comes with aa great flexibility. After a quick exploration of historic Melaka with the colonial Portuguese and Dutch mark, very popular with Asian tourists

we crossed the peninsula to the East coast

to the largely forgotten beaches. 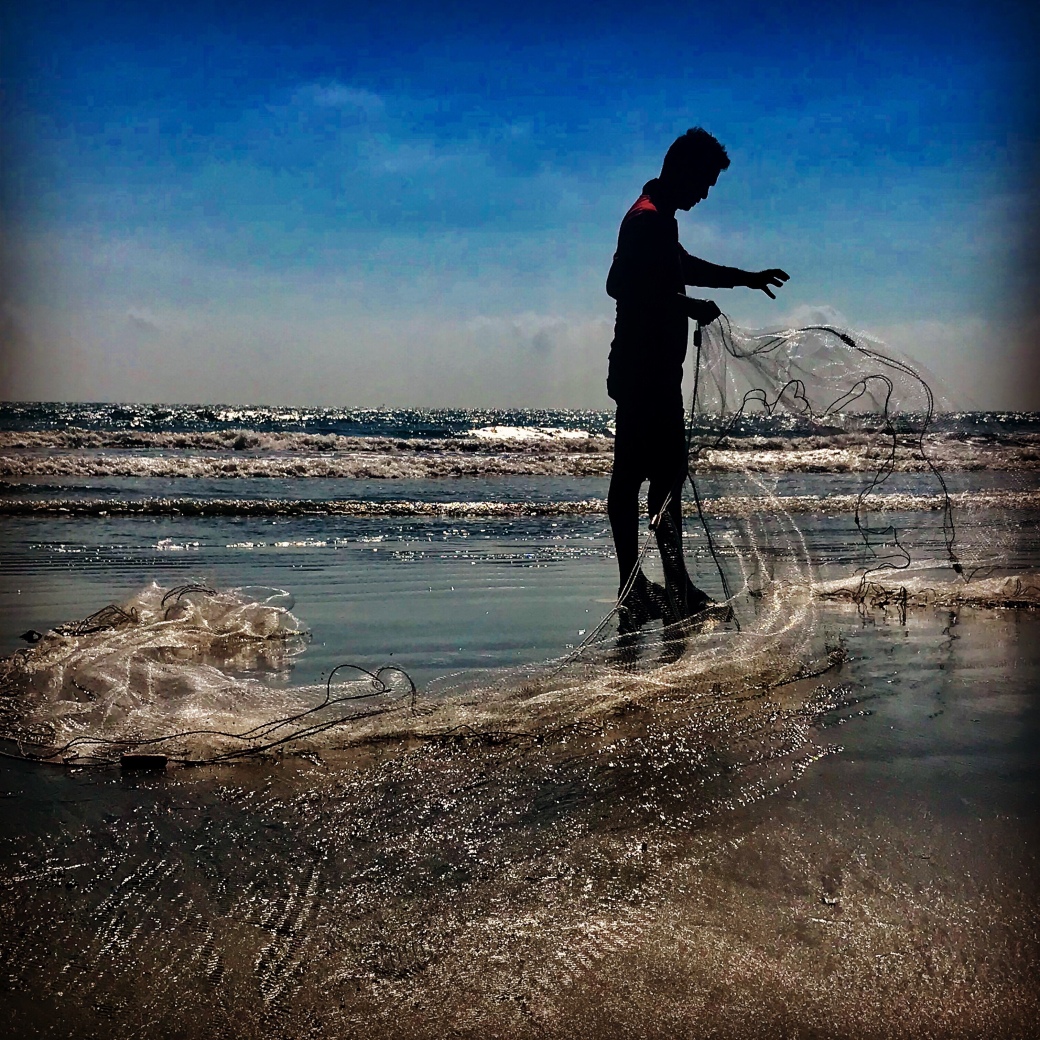 We are supposed to discover sleepy fishing campungs,

but we find more of the new of developments and if there are fishing villages, their beaches are terribly dirty. True, it is not their garbage, it is plastic and trash that washes ashore from elsewhere. Still, it is right there, marring long golden sandy beaches for miles and miles.

It is inconceivable for a country that is otherwise spotlessly clean, with a huge daily army of cleaners on the streets and along freeways, to not also clean the beaches regularly. The weirdest thing is that even the fancy 5* beach resorts with immaculate grounds and pools, do not maintain their beaches. I am at a loss.

It takes a lot of turning of blind eyes and angling the camera just so to find some Instagramable shots. 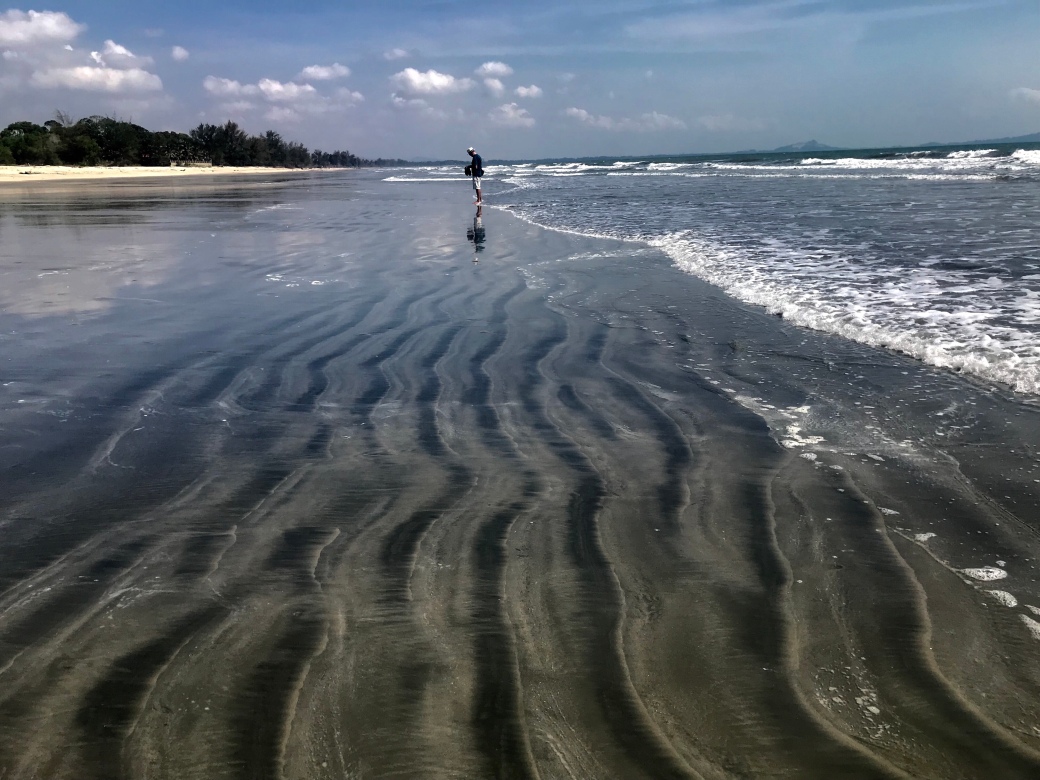 Yes, Instagram is not to be trusted. Disappointed with the state of the peninsular beaches, we decide to go on an island. But which one? According to the Malaysia Travel guide published by the Ministry of Tourism and Culture they are each and every one “one of the world’s most beautiful islands with pristine beaches and world famous scuba diving paradise”. A few German travelers we meet at a restaurant (serving German sausages) help us make the decision, as they have just returned from the week long stay at Abdul’s Chalets on Perhentian Besar and loved it. In return we give them a tip for the cleanest beach on the mainland.

We spend a few pleasant days on the island, the white flour beaches are clean where the active resorts are, but the corals and the visibility is greatly diminished. Snorkeling, we manage to see only one small turtle. Having visited one of the Turtle breeding grounds 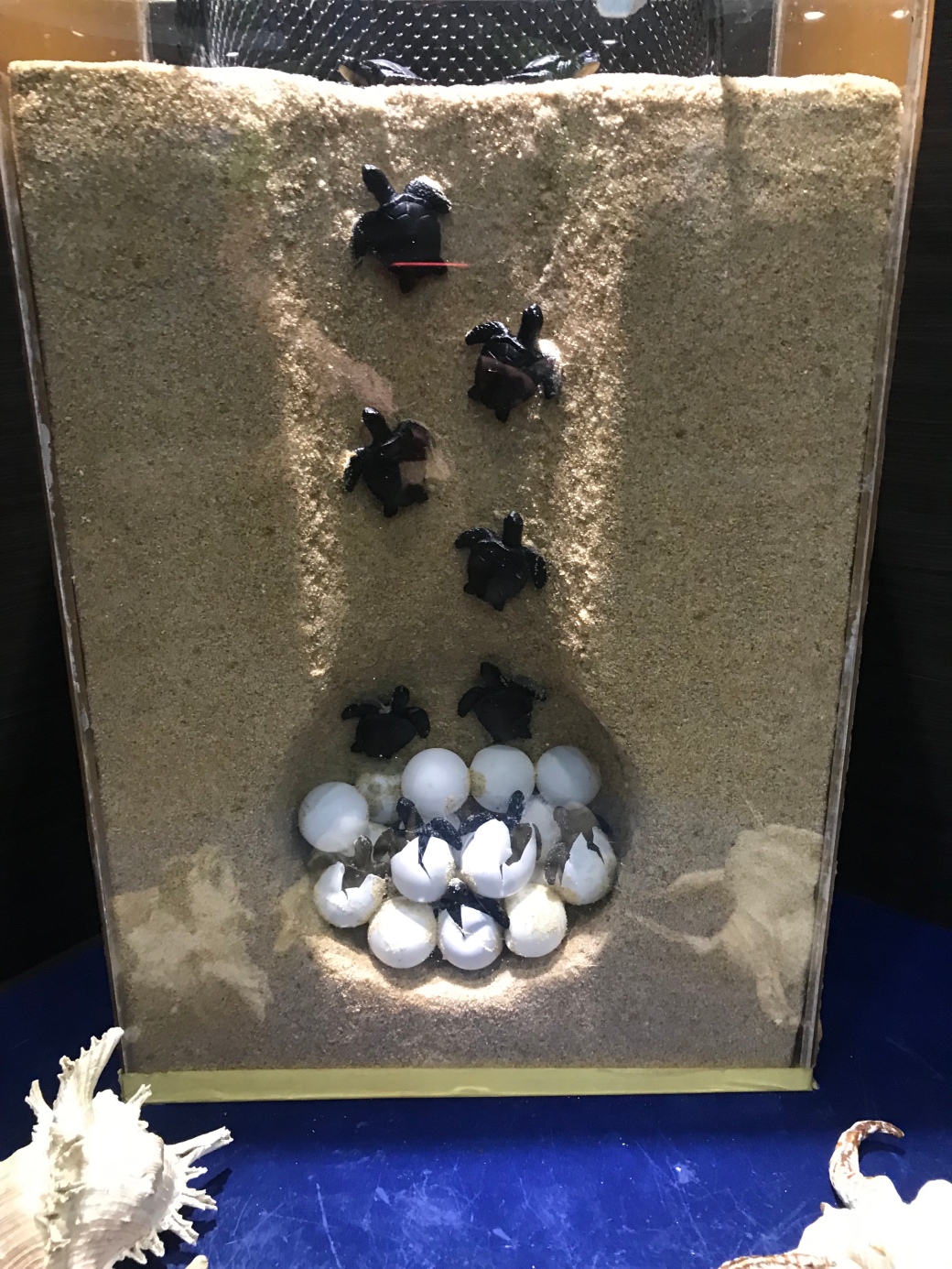 and knowing they release hundreds of thousands of baby turtles every year, it was surprising. I guess there is just too many boats, people and garbage for them to make it. Will we soon only be able to see turtles painted on the city walls?

While Mirek was in search of places with important historic past, especially as it pertained to spice trade, I was interested in another plant – tea. So after the island we headed to the famed tea plantations of Cameron Highlands. On the way we stopped at the oldest Chinese temple in Malaysia in a village outside Musang Gua. The presence of Chinese in Malaya is quite strong and ads nice flavor and color. The temple itself was not that special,

but it was set in an interesting limestone karst landscape, reminiscent of beautiful Guilin in China and traditional Chinese paintings.

And it was dedicated to one of my favorite goddesses – Goddess of Mercy Quan Yin (Guanjin). Her giant statue was looking upon the temple and the green landscape from a cave across the river.

Taking this route brought us to Cameron Highlands from the wrong, back side. As we were climbing up to the cooler Highlands we got caught in a sudden rainstorm. Out of the rain we saw giant alien structures emerging on all steep sides, huge constructs of plastic, glass, and steel. At first we thought it was some kind of mining operation, but then we got close enough to realize that they were giant green houses growing strawberries, vegetables and flowers. The second shock came when we started encountering countless tall apartment developments. All the many heat baked Kuala Lumpur city slickers escaping to the cooler highlands have to have a place to stay! So out the window went my romantic idea of the tea plantations. By the time we managed to fight our way to the other side of the valley for the iconic views ,

the biggest one, BOH Plantation was already closed. We drank a cup of tea and disappointed on all fronts decided to scrap the plan of overnighting there and press on to Ipoh. The very windy and narrow road down was going through green jungle, blessedly still untouched by the very popular and devastating palm oil plantations. We ended up in the nicest new boutique hotel in the small town of Ipoh, that was not on our agenda, but turned out to be just great. We took the advice of the friendly hotel manager and in the morning went for an enjoyable stroll through the three Concubine Lanes with nostalgic antique stores, coffee shops and lots of street art.

From there we drove to the much bigger, but still manageable George Town on Penang island. Two bridges lead to it, and of course we had to cross both. One was, according to Wikipedia, (but in total disagreement by my bridge engineer husband) inspired by the Golden Gate Bridge and the other… wasn’t. 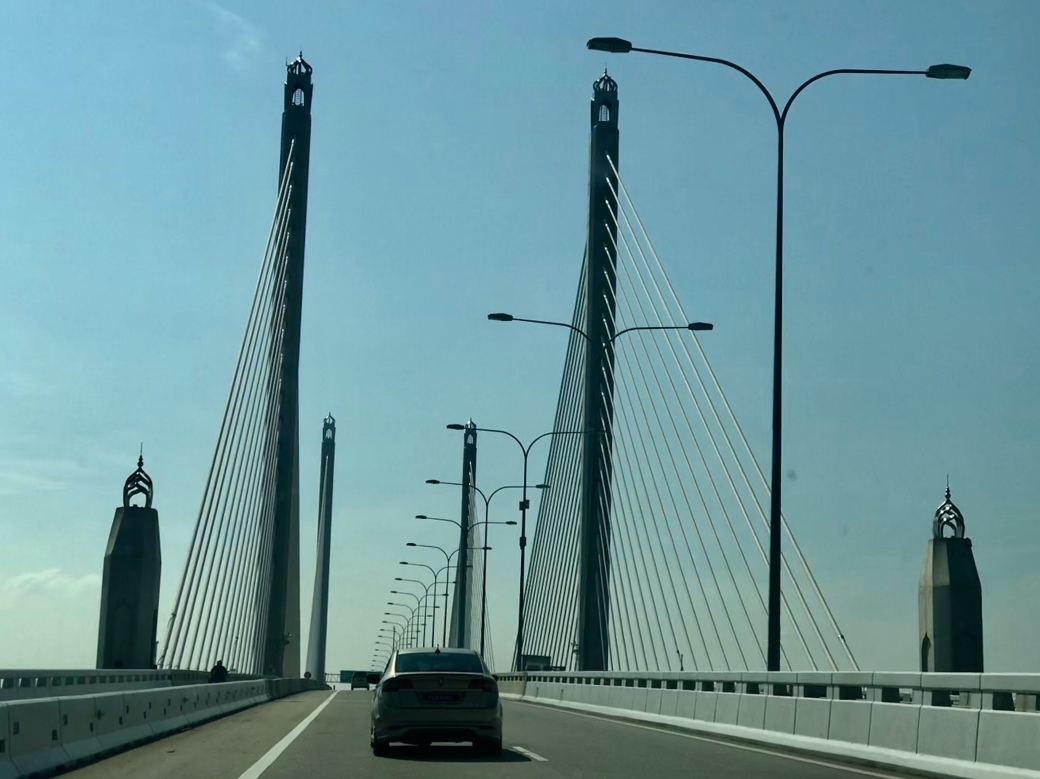 In the morning we decided to join a walking tour through the historic British and ethnic Indian and Chinese parts. The guide was excellent and funny and self deprecating and to our surprise spoke very positively about the British colonization. They brought in a lot of progress, and power, banking and institutions, he said, without them Penang would have been an insignificant village. They also brought in workforce: the Chinese and the Indians. Guess what, he was Chinese. He talked a lot about racial and religious harmony and made fun of the internal strife of Christian denominations and Chinese clans. With Muslim religion being practiced by over 60% of population, there did not seem a predominance of mosques or ostentatious displays. 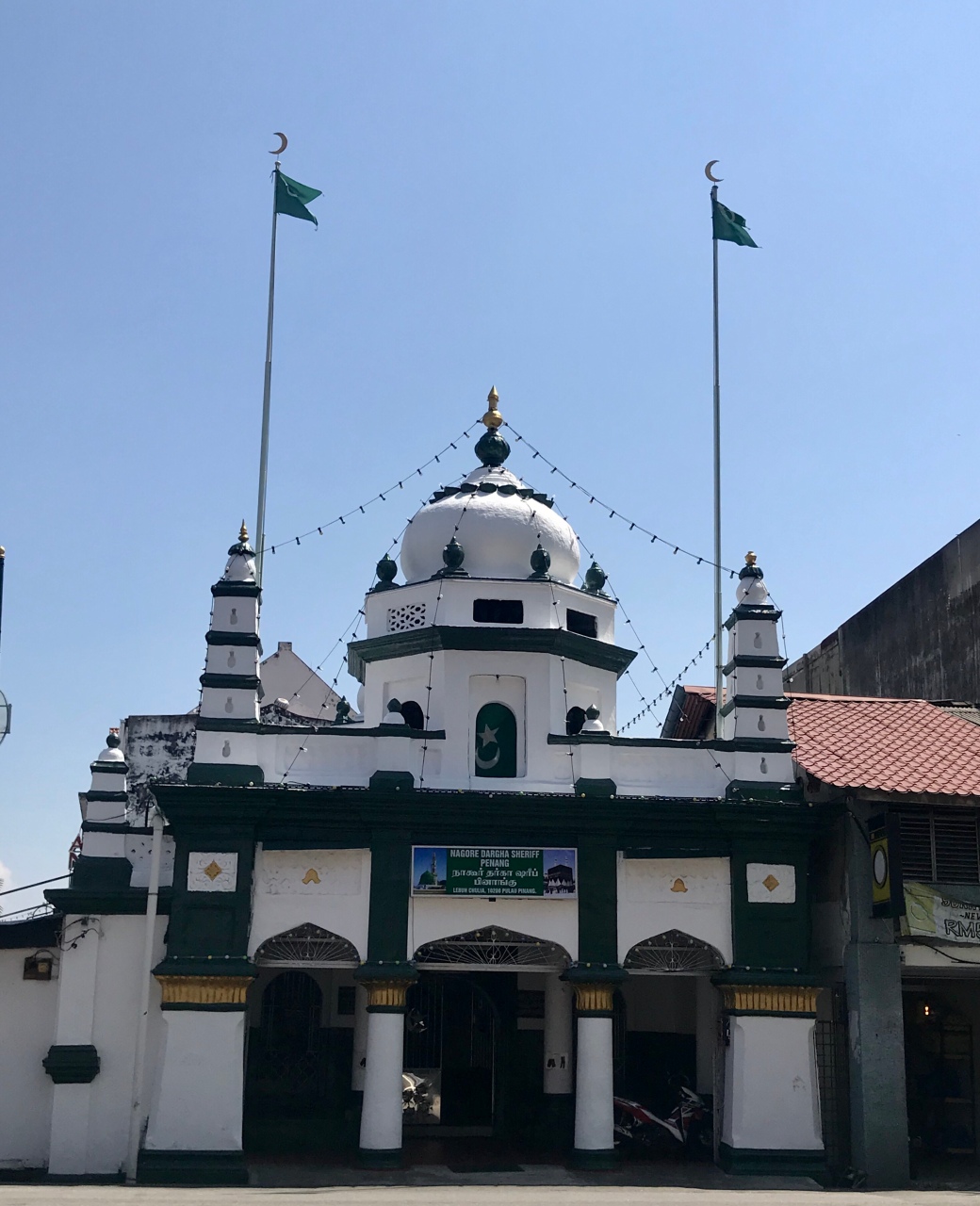 If there were any ostentatious displays of any kind they were in multitude tall apartment and office and hotel buildings.

Even more so, of course, in KL – Kuala Lumpur. What do you think of first when you hear Kuala Lumpur? I bet Petronas Twin Towers! We planned to skip KL and drive straight to the airport, but at the end the towers won. One can not be in Malaysia or KL and not see the towers. So very stupidly we drove into a trap on a Friday night no less. And we got stuck and lost and running out of gas. Took us three hours to find our way out of the traffic mess and to the airport. Well, we glimpsed the towers and we don’t need to go back. Not with a car, for sure!

It is not surprising to me that there are not that many Western tourist in peninsular Malaysia. While we found it quite easy to travel for the excellent roads, modern cities, affordable hotels and food, we found it hard to fall in love with.

Malaya is like a nice girl next door, that your mother would like you to date. She is sweet and cute, but you are really dreaming of the exotic beauty of Miss Thailand or India.