Waiting for the sun to tease open the tight pink buds sitting on bare brown branches like tiny baby birds crowding together for warmth, ready to burst open and sing the ode to long awaited spring, we wandered, dressed in all our warm clothes, over the island of Hokkaido in the far North of Japan.

We had scoured the official Japanese meteorological webpages for historical data and this year’s predictions on cherry blossoms bloom. We emailed people in Japan. Everyone said because of the mild winter Sakura will bloom early. Afraid we will miss the last wave of cherry blossoms and the famous hanami (cherry viewing) parties sweeping up north through Japan, we decided to start our three week trip at the tail end of April in the very North and then turn down South.

Well, everyone was wrong. Waiting at the airport on a long layover from Bangkok to Sapporo we looked at the weather app and panicked.

Rain and snow was predicted for our arrival. We scrambled for a few hours trying to rearrange our itinerary and book new hotels further south, only to find there were no hotels available. Or there was one smoking(!) room left for 1 person for $8,975. No kidding. 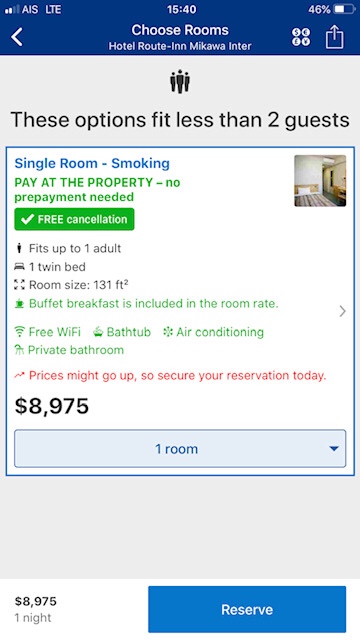 Flummoxed I texted a friend who has recently been to Japan, and she had an easy explanation, “It is Golden Week and the coronation of the New Emperor coming up on top of it. It is 10 days when the whole Japan has time off and everyone is traveling.” Oh, another great timing on our part! Start doing your homework, people!

When I told her about the weather forecast she responded, “Maybe pink blossoms and white snow will make for a beautiful picture!”

What a blessing to have friends who always see the cup half full.

And so we went. On a search. On an adventure. Reminding ourselves that truly it is the road, not the destination that matters.

And on this, at first quite cold, road we found all we hoped for and then some. For nearly the whole first week we had Japan to ourselves. We climbed up to lonely little wooden temples, 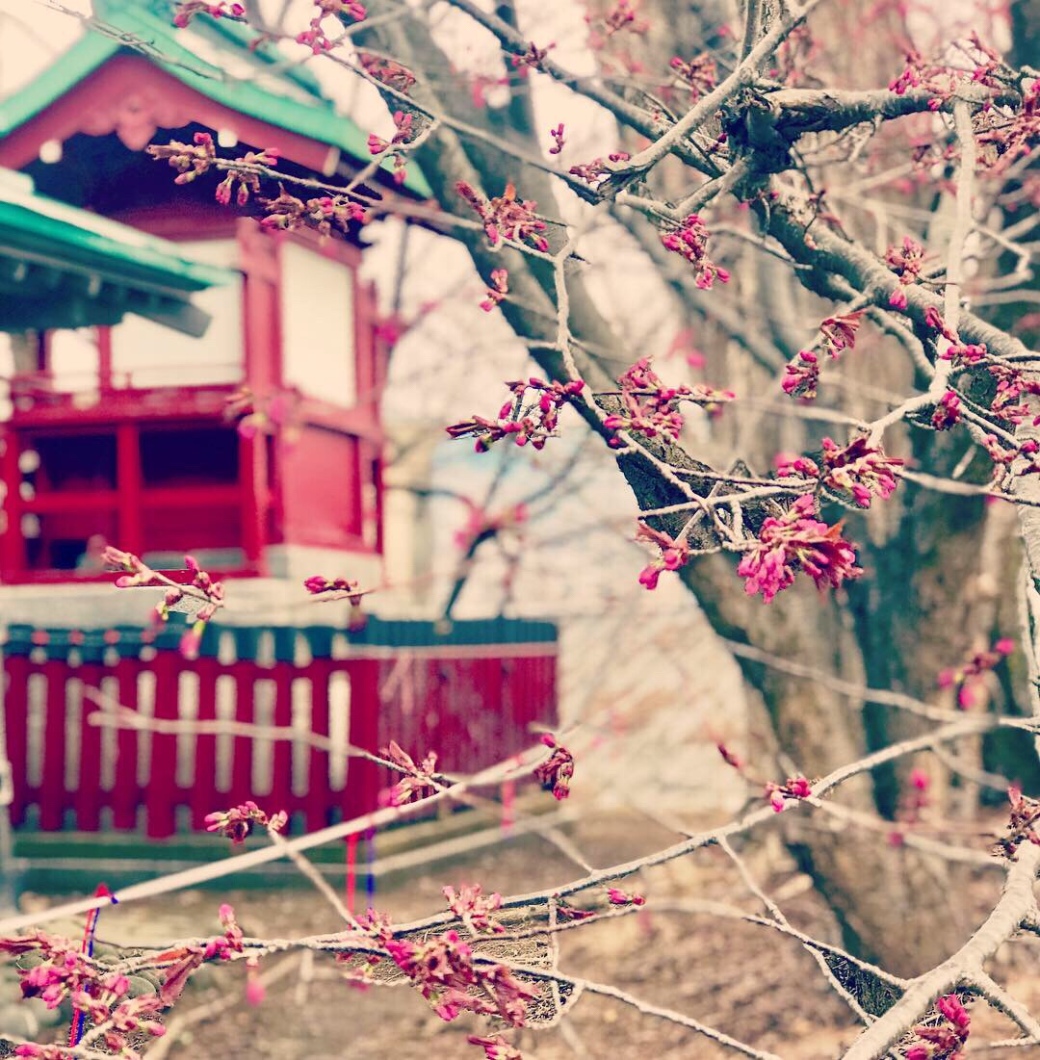 and trespassed (shhh!) into some still closed off parks, 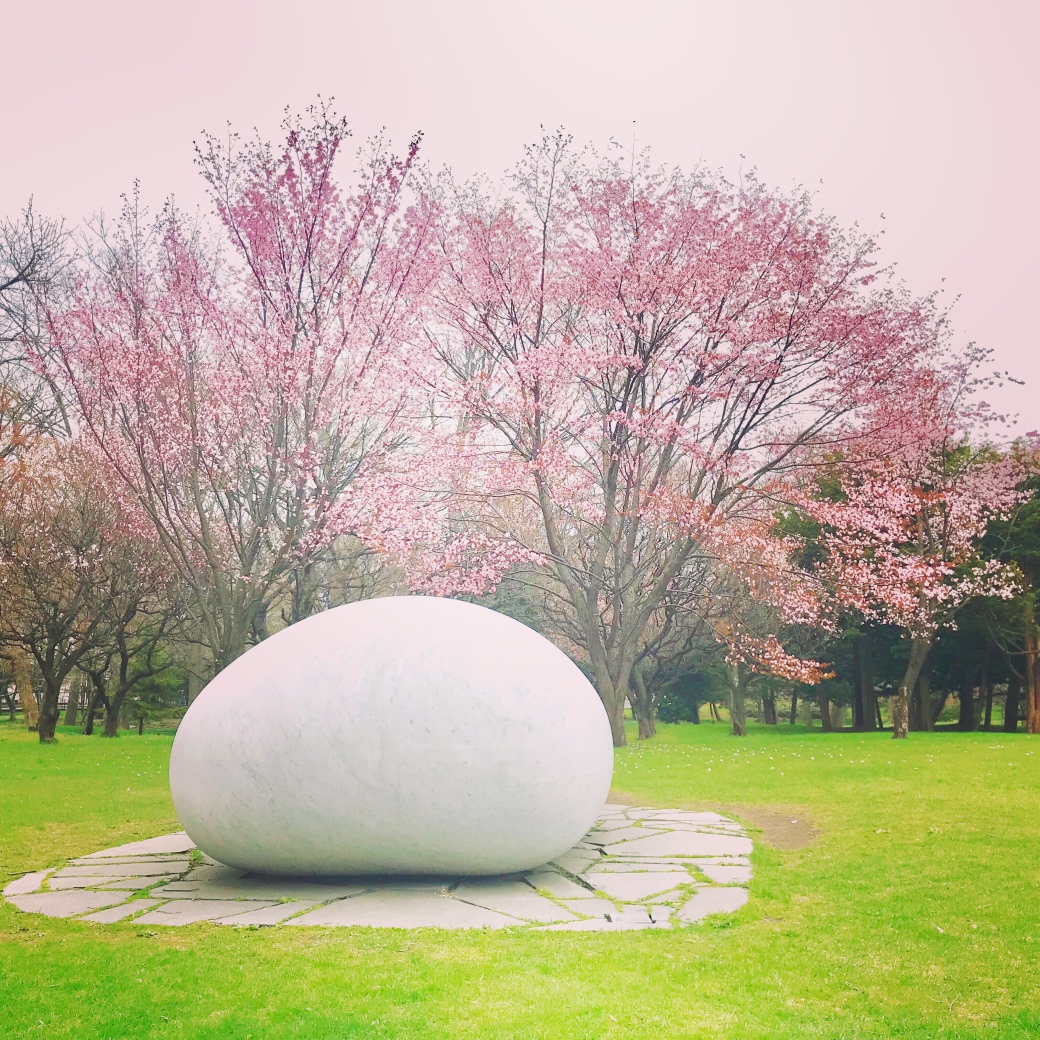 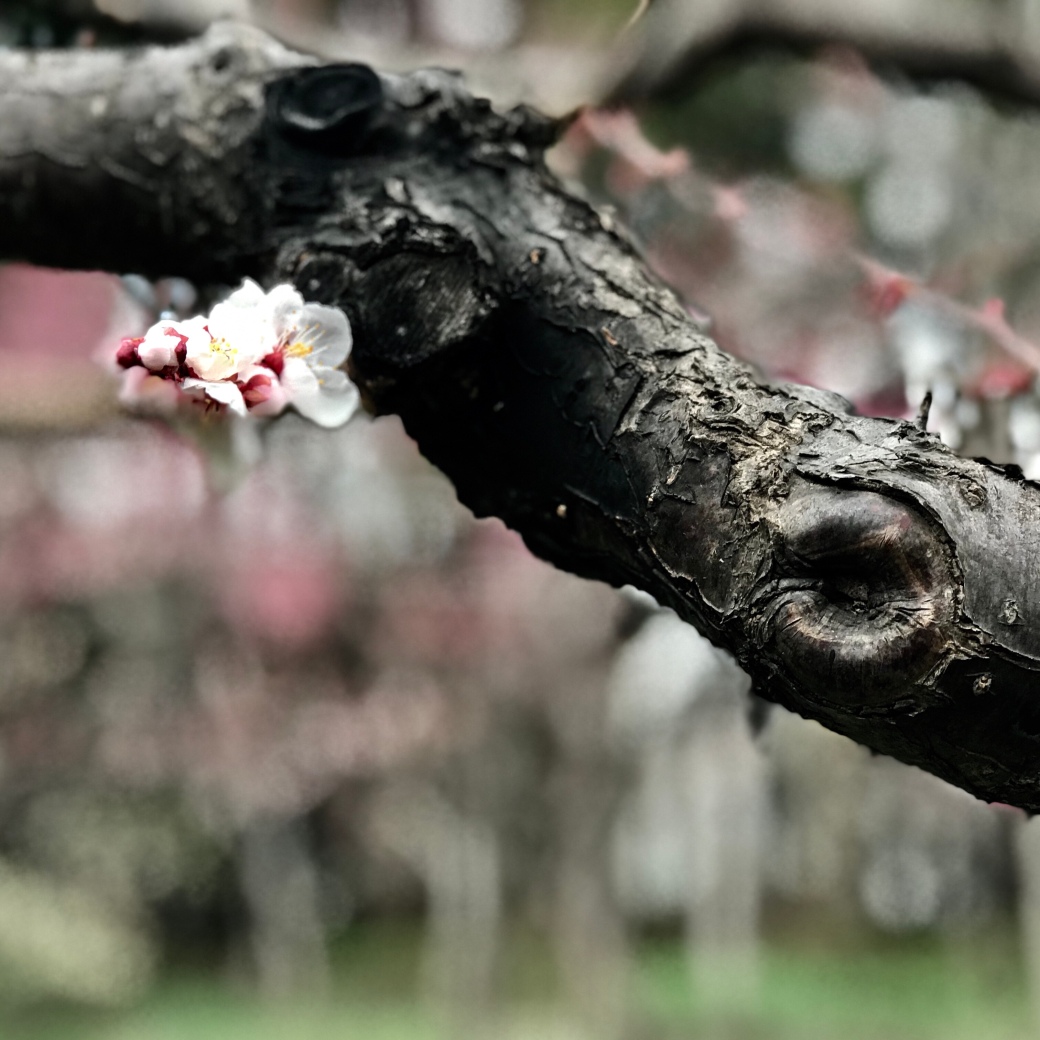 We warmed up in museums and galleries and in the 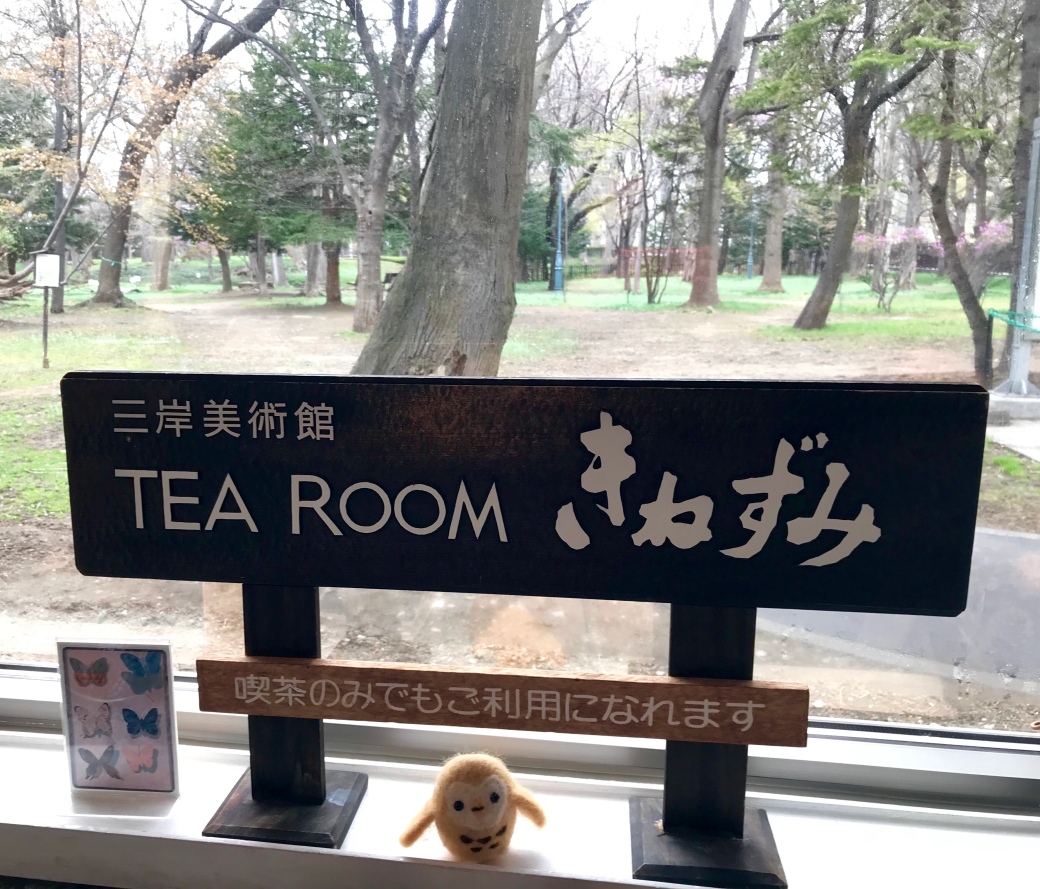 we drank copious amounts of hot tea and had fun signing the guest book.

We searched for sakura in alternate places and found them everywhere: on big gilded screens, 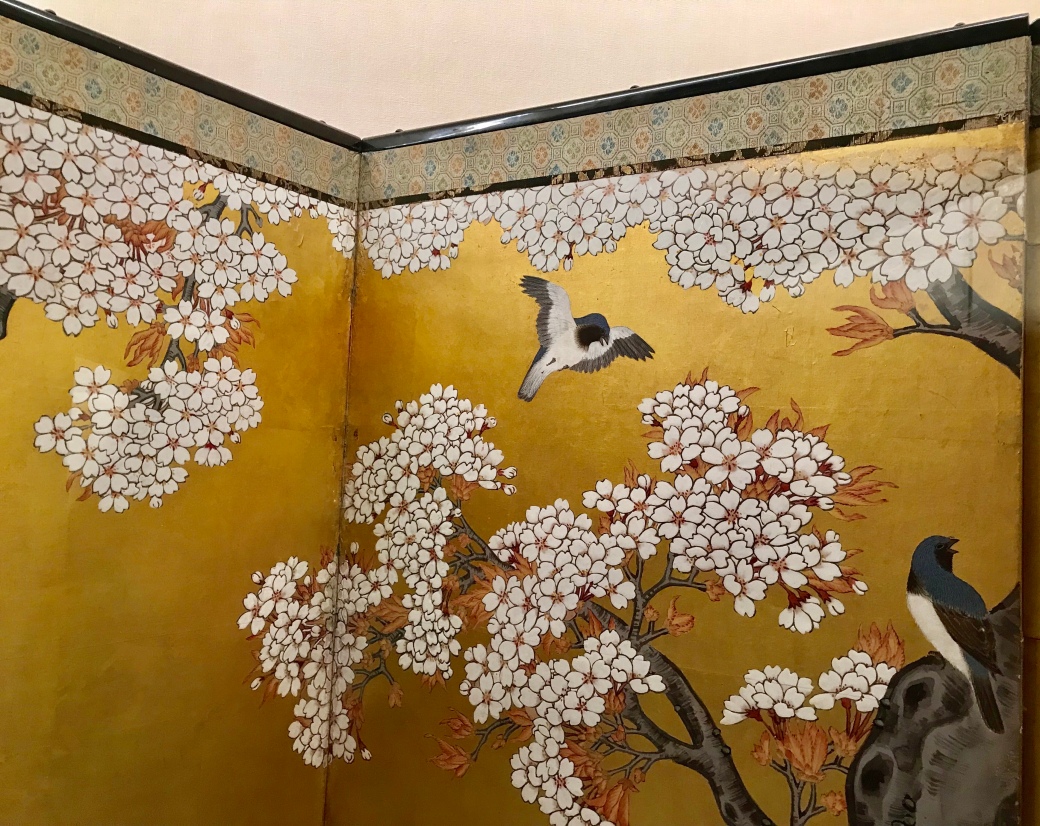 Then the day arrived with blue sky and glorious sun and warmer temperatures and we discarded our winter clothes and jumped on a train (thanks to the unlimited Rail Pass) and rode five hours to the town of Hakodate on the southern tip of Hokkaido, where 1600 old cherry trees just opened at full bloom. Planted around a star shaped fortress Goryokaku, of which only a moat remains, all the cherry trees, like beautiful blushing brides, were covered with a heavy white veil.

I don’t know if it was our relentless effort or our bated breath anticipation, but finally seeing the spectacular sight and walking, bah, practically floating, underneath the white canopy of endless blossoms was an unforgettable moment of awe and fulfillment of a dream.

For once we did not mind sharing it with about a million other people who came to enjoy the Nature’s Spring spectacle. Except for a few rowdy groups of people with kegs of beer, most of the spectators were chatting amiably or sitting quietly on blue tarps under the white canopy, enjoying their picnic lunches. Of course, if they were not busy strolling around, finding the perfect spot for a selfie.

I was disappointed to not see a single person with a book of poems, as in the olden times it was a tradition to compose or at least read a poem while drinking a cup of sake under the blossoming sakura. I have been an admirer of Japanese haiku poetry of the greats like Basho, Buson and Issa. They knew how to catch the fleeting moments of short lived cherry blossoms with a few words and impressions like this Buson’s haiku:

I was glad to see that a few young women dressed in elegant traditional kimonos and styled their raven hair.

It was a very romantic notion seeing the striking patterns of cloth amongst the patterns and shadows of the blooms and branches.

We caught our falling petals just a few days later when we crossed from Hokkaido to Honshu island and arrived in the town of Hirosaki, where the rain has scattered the blossoms of the first blossoming variety (amongst 200 wild and domesticated cherry trees in Japan). In fact the banks and the water of the moat around the castle looked like covered with freshly fallen snow.

Luckily there are 2600 cherry trees at Hirosaki Park with over 50 different types of cherry trees including the classic simple Somei Yoshino cherry blossoms, Shidarezakura (Weeping Cherry), and Yaezakura (Double Layer Cherry) and many were still blooming happily. The basic classification of cherry blossoms is simple, there are only two groups. If they have 5 petals they are called single and if more than 5, then they are called double,

even if some have up to 50 petals forming one fluffy blossom. 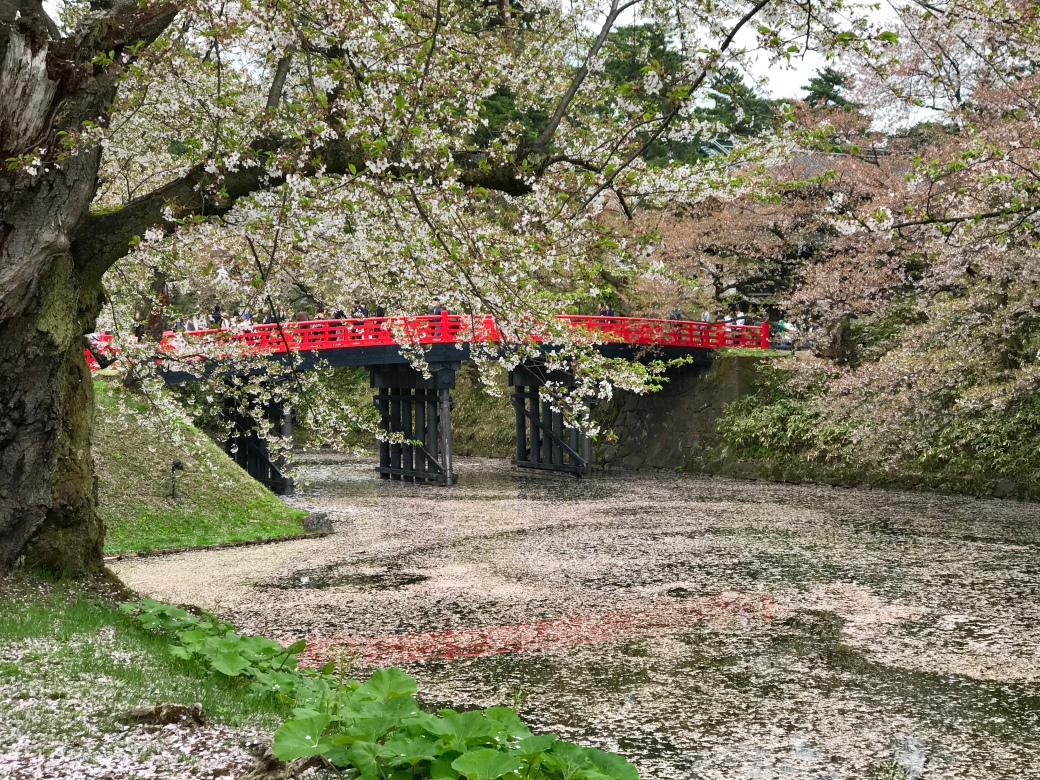 We crossed over a cheery red bridge to reach the big tower, the most substantial remnants of the castle. The cascading pink weeping cherries 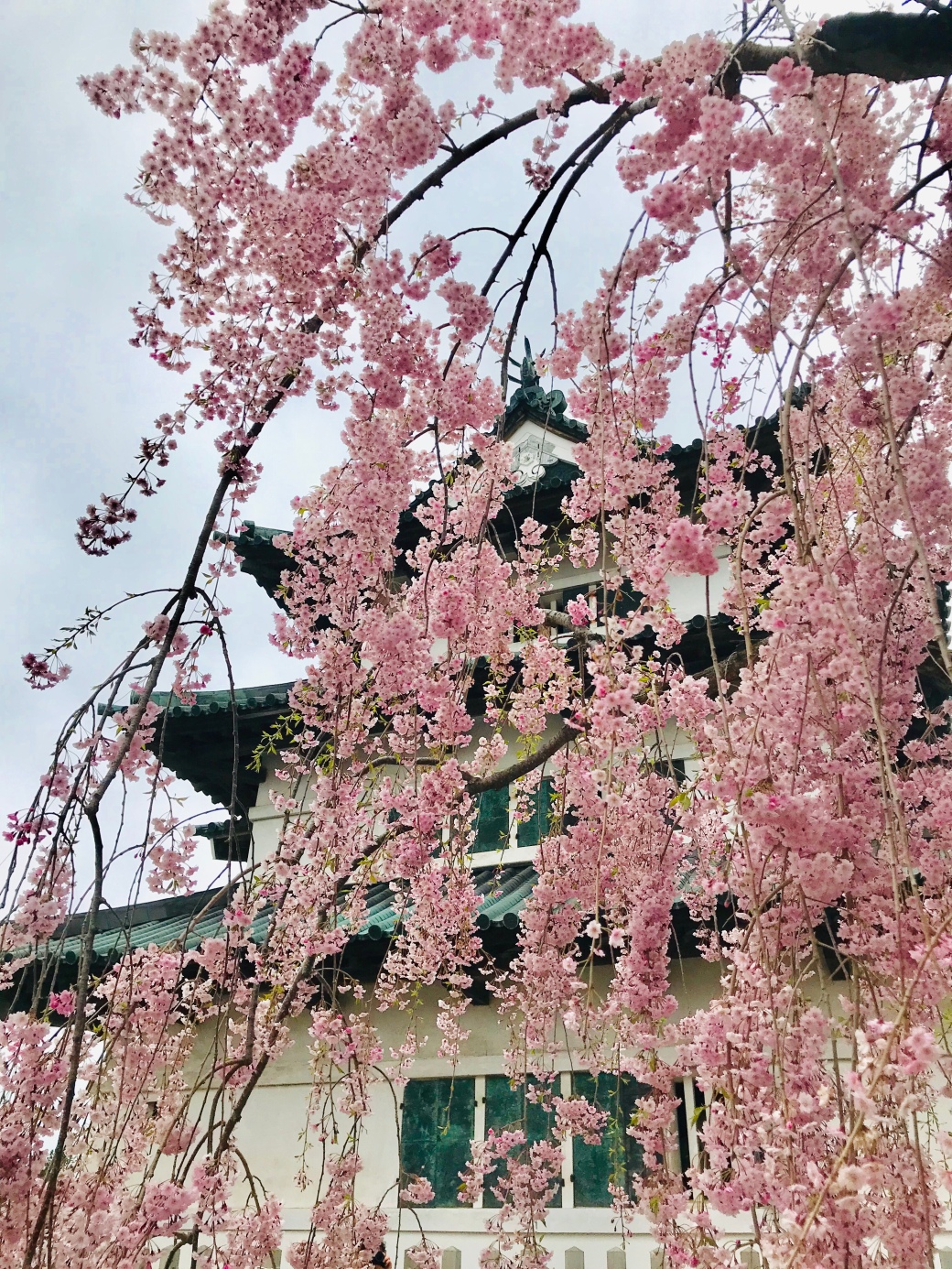 enhanced the rather simple architecture. It was really the trees that stole the show. Some were very old and majestic.

There is a special spot in the garden, forming a hearth in the canopy,   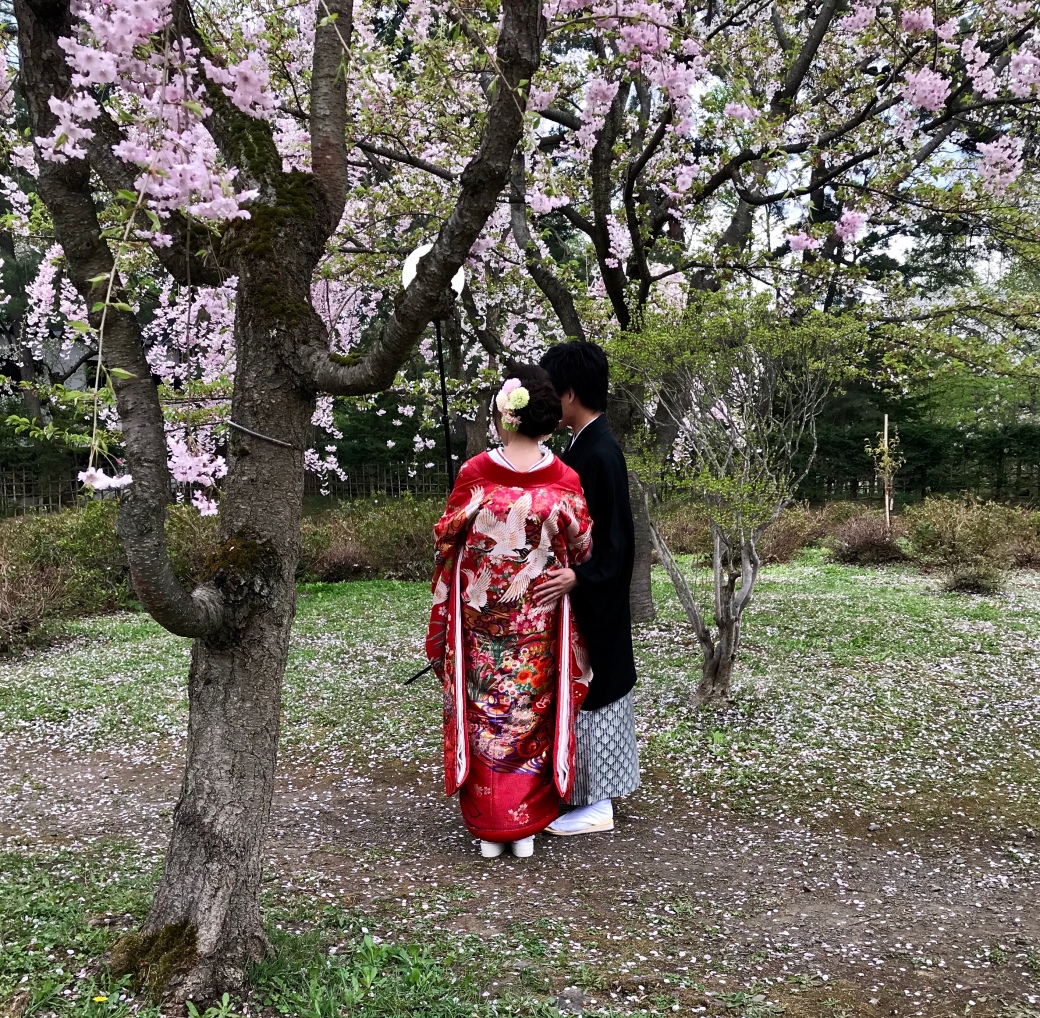 May their love blossom beautifully like the lovely sakura of Japan!

As for us, the Great Sakura Search brought us Moments of Awe, Bliss, and Small Delights. All there is left to say is:

9 thoughts on “In Search of Sakura”