As a young penniless student of art history nearly 40 years ago, I came to see firsthand the beautiful medieval frescoes in the Lake Ohrid monasteries. I dragged along a boyfriend and as he was just as penniless as me, we often hunkered down for the night in our sleeping bags by “cultural monuments”, hoping to get sanctuary and protection. If we were lucky and the monasteries were inhabited, despite the communist crack down on religion, the kindly nuns in age old tradition, utterly surprised and delighted by young visitors, would offer a bed and some home made bread and cheese.

This time not as young, alas, but also not as penniless, with husband in tow, I had more comfort in a wonderful apartment overlooking the vast blue Ohrid lake from our balcony. 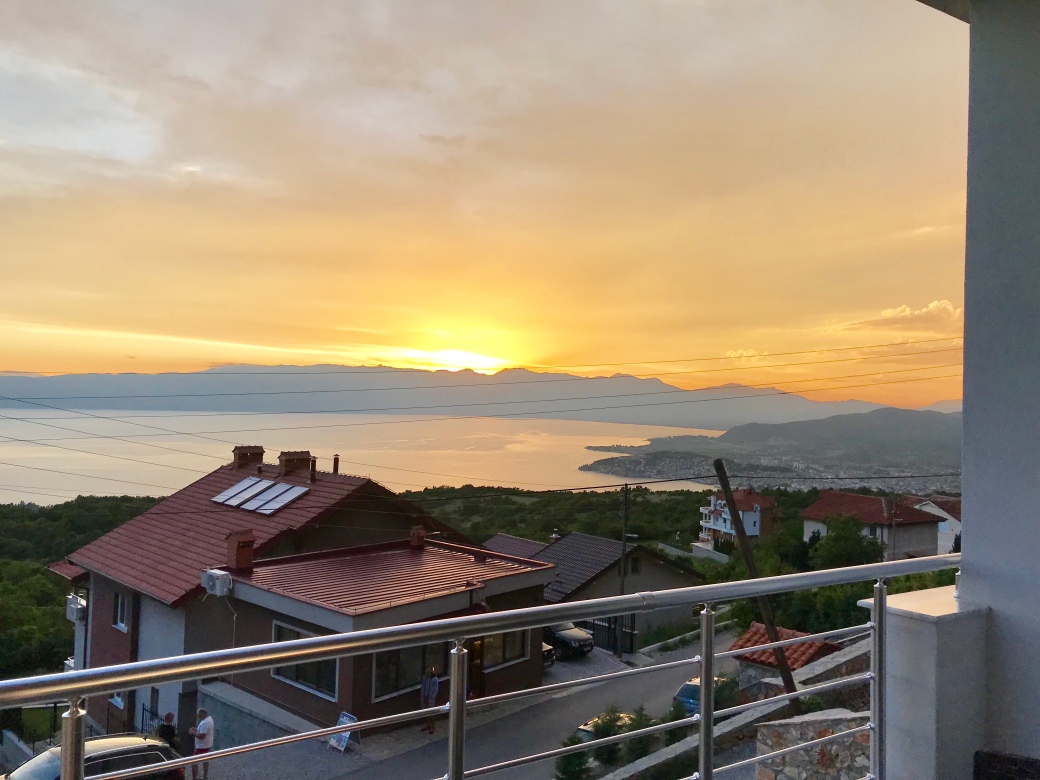 In fact there were some spectacular sunsets to revel in.

The two new tourist apartment buildings in a village close by old Ohrid town were built and ran by two kick ass Macedonian women. They became fast friends and offered suggestions and advice as well as the services of their hairdresser and on top of it, did our couple weeks worth of laundry. 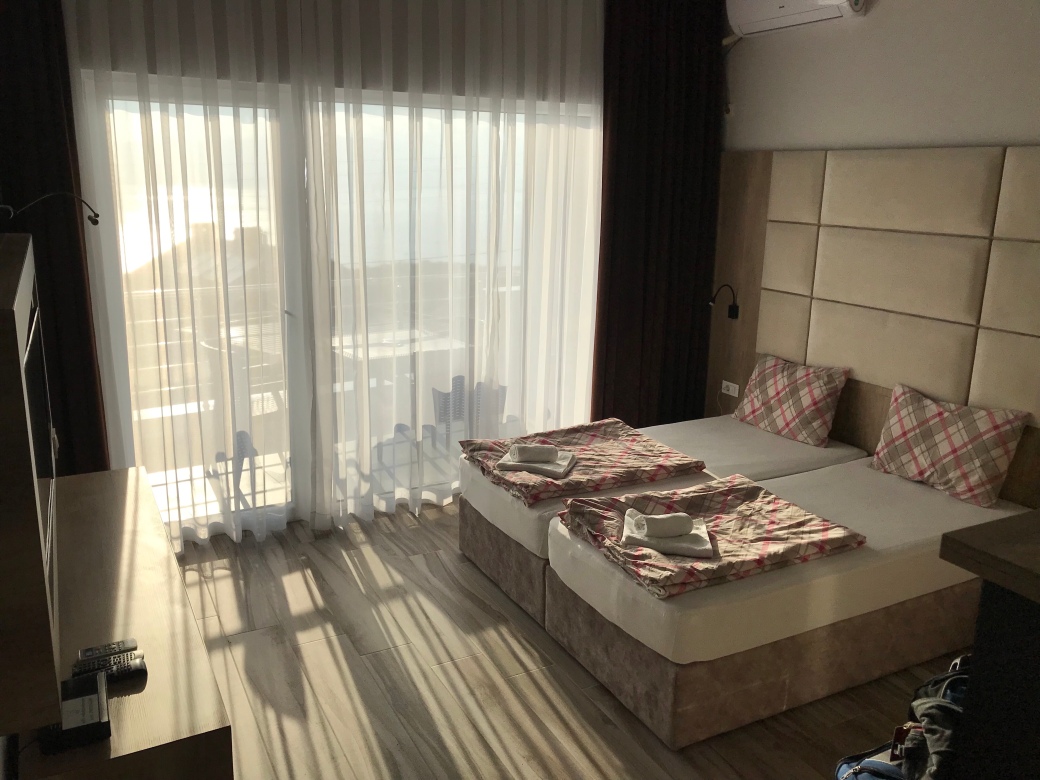 We rarely stayed in one place for more than a day or two on our Balkans trip, and thus we mostly stayed in hotels, that were of very high standard and incredibly affordable. But not having a very precise plan we were doing our reservations on the fly. Be it on Booking.com or Airbnb, after awhile it can be a bit tiresome and stressful to have to keep looking for accomodations night after night. Sometimes we would make a reservation 20 minutes before arrival to a hotel on the iPhone app and the hotel receptionist would be mighty surprised when we showed up. You do get better at using filters on the booking systems and reading the descriptions and reviews that give you a more accurate picture of a place.

Yet not having an advance reservation gives you additional traveling freedom to change plans or stop for the night earlier, or later, than planned. Thinking back to our young travel days we are feeling grateful that the days of youth hostels and worse are behind us and we can now choose nice, solid 3* – 4 * accomodations

(in this neck of the woods, anyhow).

Traveling by car gives you the freedom of staying away from bigger cities in cheaper and quieter accomodations, but when you are in the cities it is a pain in the neck to deal with traffic and even worse – to find parking. So far we only know of one parking ticket we earned on our trip! Generally we did avoid cities, but I insisted we had to spend one night in each capital.

And there definitely isn’t a more psychedelically memorable capital than Skopje. Especially at night. Being squeezed between three bigger nations, Serbia, Greece and Bulgaria, who at times all held chunks of Macedonian territory as part of their own kingdoms, claiming Macedonian Slavs are really just Serbs/Bulgarians/Greeks is not an easy position to be in. Macedonians only got their defined nationhood and home after World War II and only as one of the Yugoslav SFRs (Socialist Federal Republics). After the disintegration of Tito’s Yugoslavia they have for the first time achieved statehood under the name of Macedonia, and as recently as 2018, under pressure from Greece, changed it to Republic of Northern Macedonia. (The other Macedonia being south of Northern Macedonia in the North of Greece. Confused much?). Having constantly to prove your existence, your nationhood and statehood must make you want to go big with flags, statues and fountains. And big they go. Giant new classical columned buildings of parliaments and History Museums abound. Generating enough electricity to keep them lit the whole night must set the government back a pretty penny. (Hence not much money is left for sidewalks and public transport, practically non existent.)

Hero sculptures loom everyone. Sometimes they even borrow their neighbors heroes as their own. Conspicuously missing (read removed) Alexander Macedonski aka Alexander the Great, after Greeks threw a hissy fit. But here is Bulgarian Tsar Samuil, the emperor of the 1st Bulgarian Empire at the end of the 10th century. He himself was actually of Armenian parents, so here you have it.

Well, at least we know Sam was a fan. So much so that he moved his capital to Ohrid and built his summer palace on an island in Prespa Lake nearby.

We tried to get to the overgrown remnants of his palace, but by the time we found our way on the badly posted and badly maintained road, the wind had picked up and the fishermen pulled their boats to shore. But chatting with the guys, watching the gathering of the clouds over the blue lake, seeing cormorants and pelicans and water snakes without another tourist in sight was worth it.

To this day one can find the sturdy walls of Samuil’s Fort on the hill at the top of Ohrid town. As we climbed through old Ohrid cobblestones streets, we enjoyed peeking into the courtyards of distinct black and white houses.

and admiring the views of the blue green water of the lake replete with white swans. 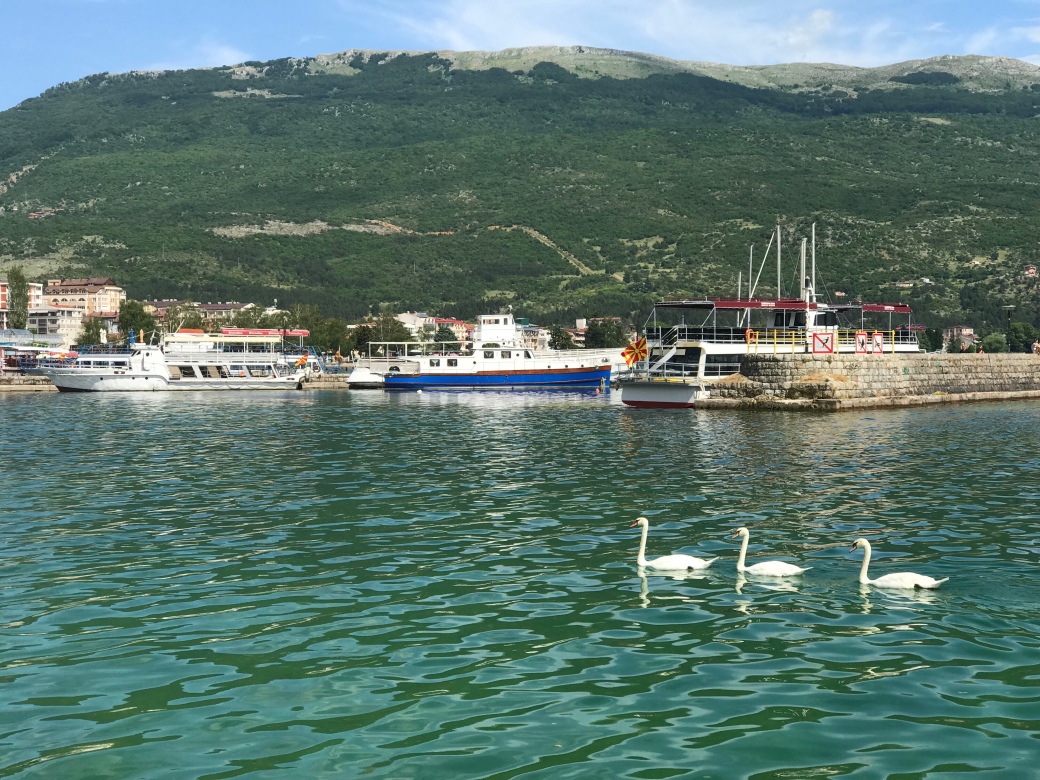 But of course I had to check on the old frescoes in the early Christian churches. Ohrid once had 365 churches, one for each day of the year, and has been referred to as “Jerusalem of the Balkans”. Some of the 365 churches are still standing in quite the original shape and form. The frescoes are still there, and nicely cleaned and restored, too. As usual I was on the lookout for the angels and found a full procession of them bowing to Virgin Mary.

They do so in the beautiful Church of Sv. Sophia.

You all will probably know a much more famous church of Hagia Sophia in Istanbul. I always imagine a young woman under the name of Saint Sophia. A wise one, of course, as Sophia in Greek means Wisdom. Wisdom is always associated with the Greek goddess Athena. But we are in Christian mythology waters here and there is a story of an early Christian mother named Sophia who dies of a broken heart after her three daughters: Faith, Hope, and Charity are killed for their Christian beliefs. Rings a bell?

But as much as we all like stories, the Saint Sophia churches around the world are really dedicated simply to Holy Wisdom.

When it comes to illuminating wisdom I was particularly taken by a wise choice of public lighting in Ohrid, where the lamps are in the shape of traditional black and white Ohrid houses and have LED bulbs.

Quite befitting for a town that originally was known under the Greek name Lychnidos, meaning “the city of light“.

There was another source of illuminating light and wisdom centered in Ohrid. It was the first Slavic University or Literary School established in the 9th century by St. Clement and St. Naum, the prominent disciples of Cyril and Methodius, who did much to spread Christianity amongst the Slavs. St. Clement

is associated with creation of Cyrillic alphabet.

Today 250 million people in Eurasia use it as the official alphabet, most notably Russians. I wonder how many are aware their alphabet was created by a Bulgarian, born in Greece and buried in Macedonia.

With kingdoms coming and going, conquests and defeats, borders were fluid on the Balkans to say the least and many different tribes happily lived together or killed each other with vengeance. They inevitably influenced each other in language, dress and of course, food. 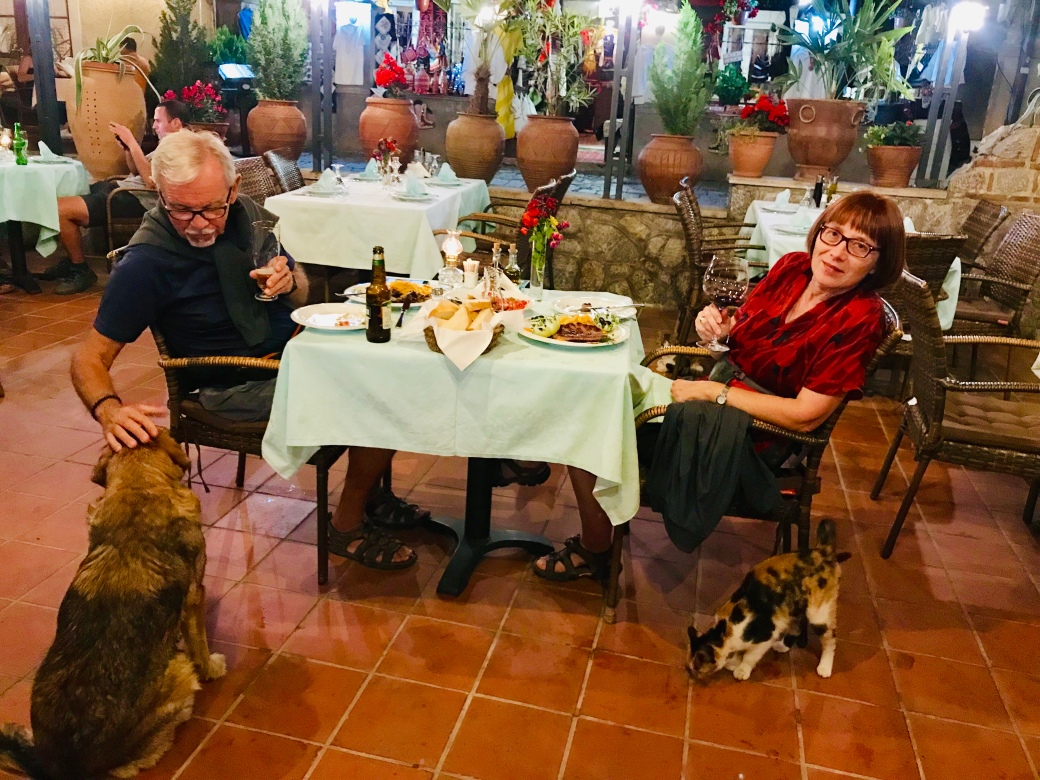 Even so far north as Slovenia, the country of my youth, we have a strong mixture of Central European dumpling and potato dishes with Balkan meat feast of čevapčiči and Shish kebab. Green salads are interspersed with tomato and cucumber salad, sometimes with onions and crumbly cheese on top. You will find this delicious salty summer salad everywhere in slight variations under different names: Greek Salad, Bulgarian Salad, Shopski salad or in Turkey . . . no, not Turkish, but simply – Shepherd’s salad. I do find it in part comical and in part infuriating when people start arguing over what a certain dish should be called or who invented it. Probably some poor shepherd’s wife trying to stretch her food budget.

I am a big fan of burek/börek in any shape and form.

This cheap and filling flaky pastry and salty cheese dish had spread with Ottoman Turks throughout the Balkans and when devoured fresh out of the oven is particularly satisfying. This one was one of the better ones I had on our trip. I devoured it at the House of the Miyak’s which is part of ancient Macedonian Sv. Jovan Bigorski monastery on the way to another blue Macedonian lake-Lake Mavrovo.

Though the monastery had a number of high profile relics (they kinda gross me out), I was more interested in the cultural lore of the mountain tribe of Miyaks. Their biggest village Galichnik never fell to the Turks and to this day they are proudly keeping alive their traditions. I am sad to see that we have come too early to witness the yearly traditional wedding with a day of dancing and feasting. I have to make do with a beautiful collection of traditional costumes.

I could spend hours and days admiring the intricate hand made items but we need to head towards the border. But first we will have our last Macedonian feast at the tiny Lebedevo lake.

We can easily imagine it is a wedding feast.