It pains me to admit it, but we went to Moldova for all the wrong reasons. With one important exception – drinking excellent Moldovan wine in situ.

Ever since Republic of Moldova became an independent country I wanted to go. It sounded really cool to go to a country that nobody I knew has been to and nobody really knew anything about. It only took us 28 years to make it there. No rush, though! To this day Moldova, the poorest country in Europe, is also the least visited country in Europe with only 11,000 annually recorded visitors from abroad.  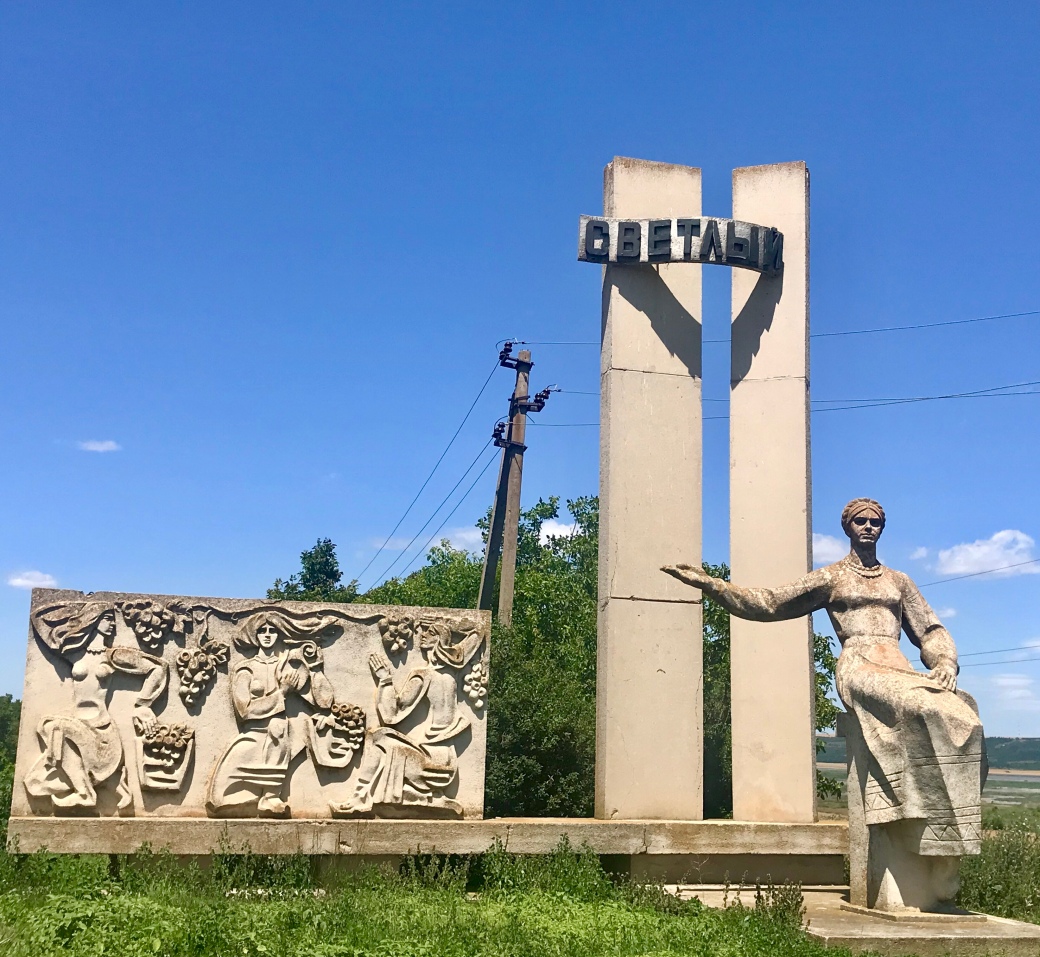 A while ago the ex Soviet Republic gained notoriety as the unhappiest country in the world according to World Values Survey. Why would one want to go to the most unhappy country? I just refuse to believe that statement! As always I question authority and the hyped up news titles. There is no way it could be more unhappy than say war torn Syria or Yemen.

OK, it truly, really isn’t. But we certainly were the most miserable travel couple the day we arrived. It was not so much the wait at the border crossing, where in total chaos we kept being yelled at in Romanian and Russian by other miserable car drivers, it wasn’t so much getting lost and more lost on badly signed and even worse maintained roads,

nor was it the lack of any reliable information from anyone we asked, it came down to a terrible case of food poisoning that kept us on our knees half the night in our otherwise very lovely boutique hotel. There are small graces you might appreciate, if you get a moment between bathroom runs: having your own en suite bathroom is one, and having a nice clean bathroom with cold tile where you can lie down before you muster the strength to climb back into bed, another. 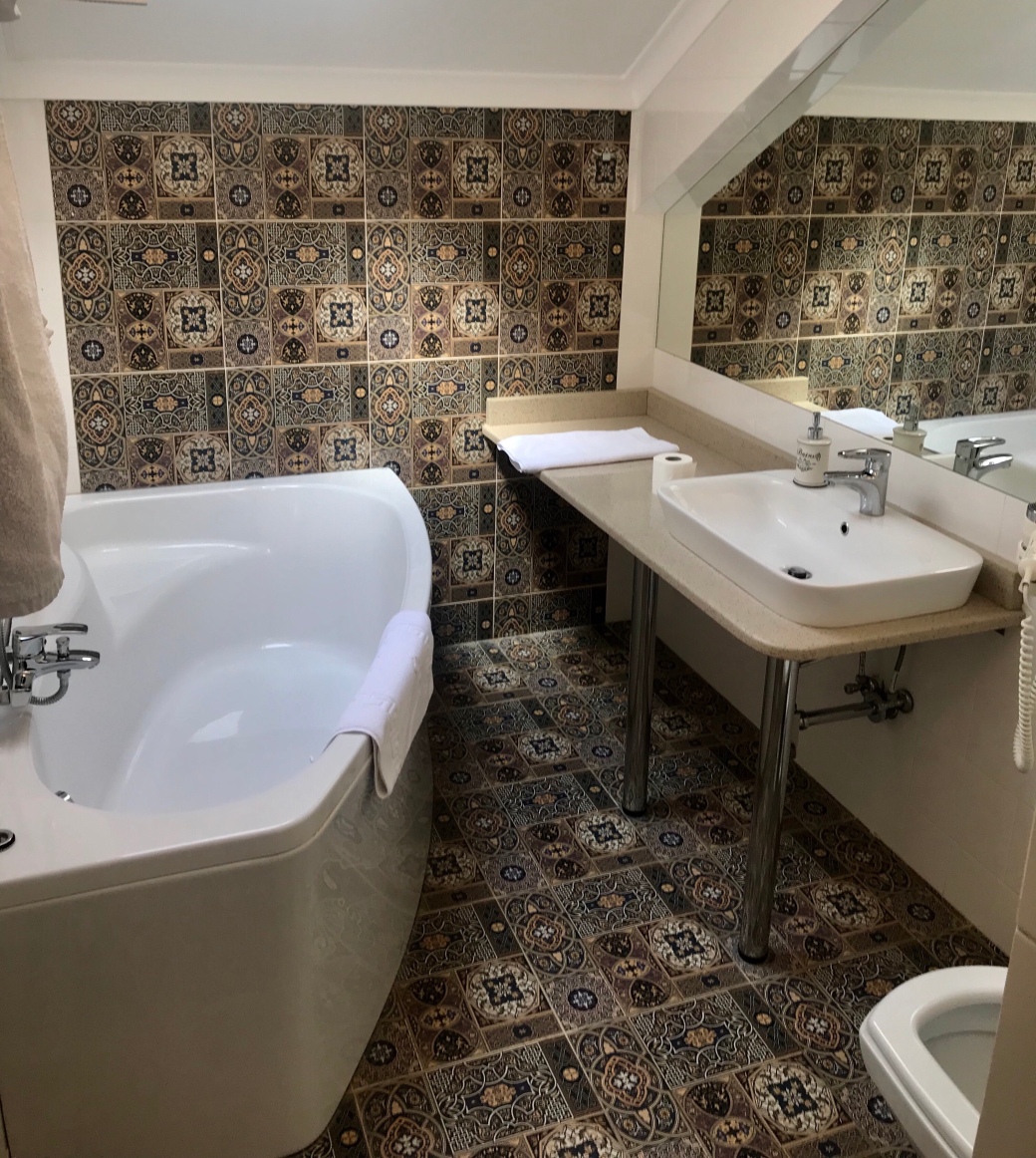 The receptionist was very kind and happily moved us to another unbooked room for an extra night so we could recuperate.

Once we did somewhat, we stumbled around hot as hell capital of Chisinau (Chișinău/Kishinev) in search of an air conditioned coffee shop.

In better shape we could have seen most of the main sights in just about half an hour. They are all centered around a small park with a Nativity Cathedral, a tiny Arc de Triomphe, 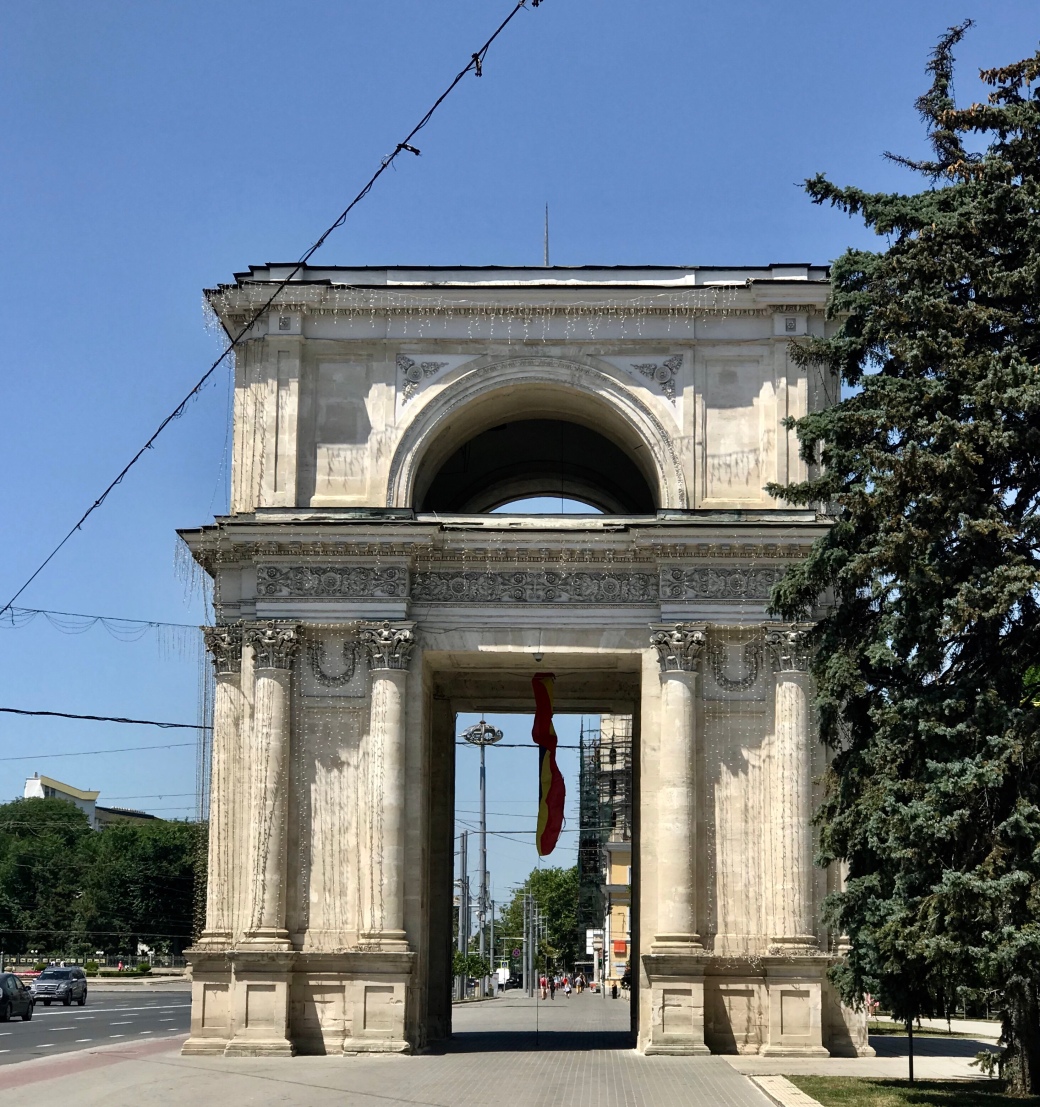 and a statue of Stephen the Great, a Moldovan prince who resisted Ottoman rule. There are a few other spruced up neoclassical buildings around, surprisingly bedecked with European Union flags.

While some are trying to get out of EU, some are desperate to get in.

Of course my husband can’t help but notice all the other architecture, the reminders of his Soviet overshadowed childhood. And there is plenty to notice: blocks of Soviet-style buildings and run down apartment complexes running each and every direction.

How about getting out of the capital and into some historical places? Supposedly a short drive from Chisinau there is an old monastery of Orheuil Vechi. A short drive becomes a long drive, because:

– B our Google maps doesn’t work here and Maps.me takes us the wrong way, which is the short way that brings us dangerously close to the border of the renegade Transdniester Republic. Oops, there are some guys in strange uniforms at the crossroads. In our rudimentary Russian we ask, “Moldova da?” and they nod. Then we say: “Orheuil Vechi kuda?” and they point to the road. As we drive away we spy a lone (abandoned) Moldovan tank in the bushes. These were definitely not Moldovan soldiers. Wondering if there is an invasion in the works we continue through a village and after consulting with a farmer turn back and take an unpaved road that brings us to another village. We ask some people parking a car, but they are Ukrainian tourists that just arrived. We find the garden of a Homestay restaurant with some young Polish guys. They have no clue where the monastery is, but they are happy to share their booze if we would like? 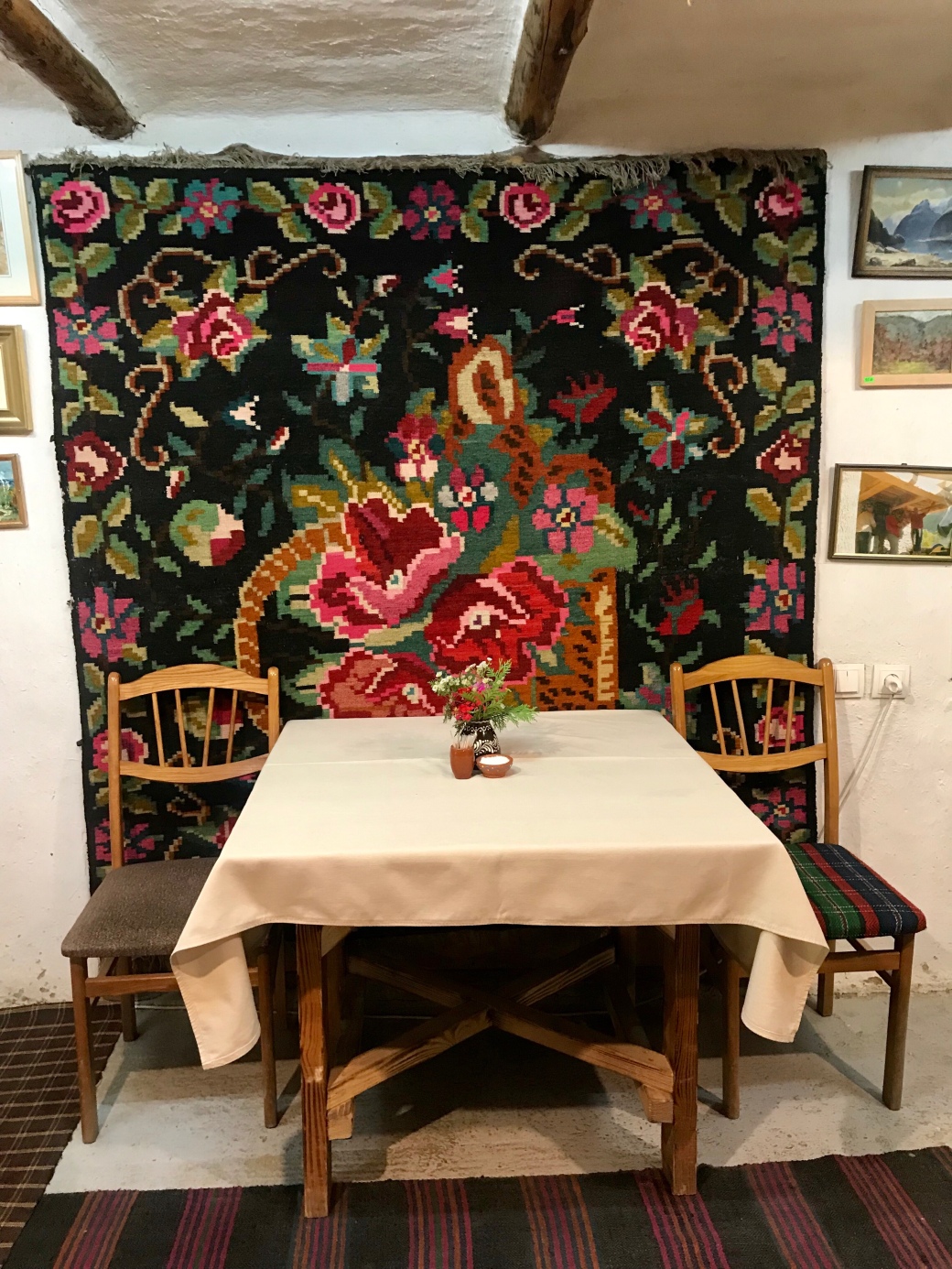 Don’t bother asking the cook, they say, she doesn’t speak anything but Moldovan. Luckily there is a Moldovan family eating lunch inside that lives in Denmark and they tell us in perfect English that the monastery is just around the corner, but we will have to park the car and walk up the hill. So past the old cemetery

we walk up the hill until we find some stairs leading into a tunnel of sorts and into the dark cave lit by some sputtering candles. Monks have dug this underground sanctuary in the 13th century and the old monk mumbling prayers in the corner looks like he might as well be from that time. He is barefoot with long gray hair and beard and an old black torn habit.

He scares the bejeezus out of me. I walk out to the ledge above the river and I scare myself looking into the wooden window frame 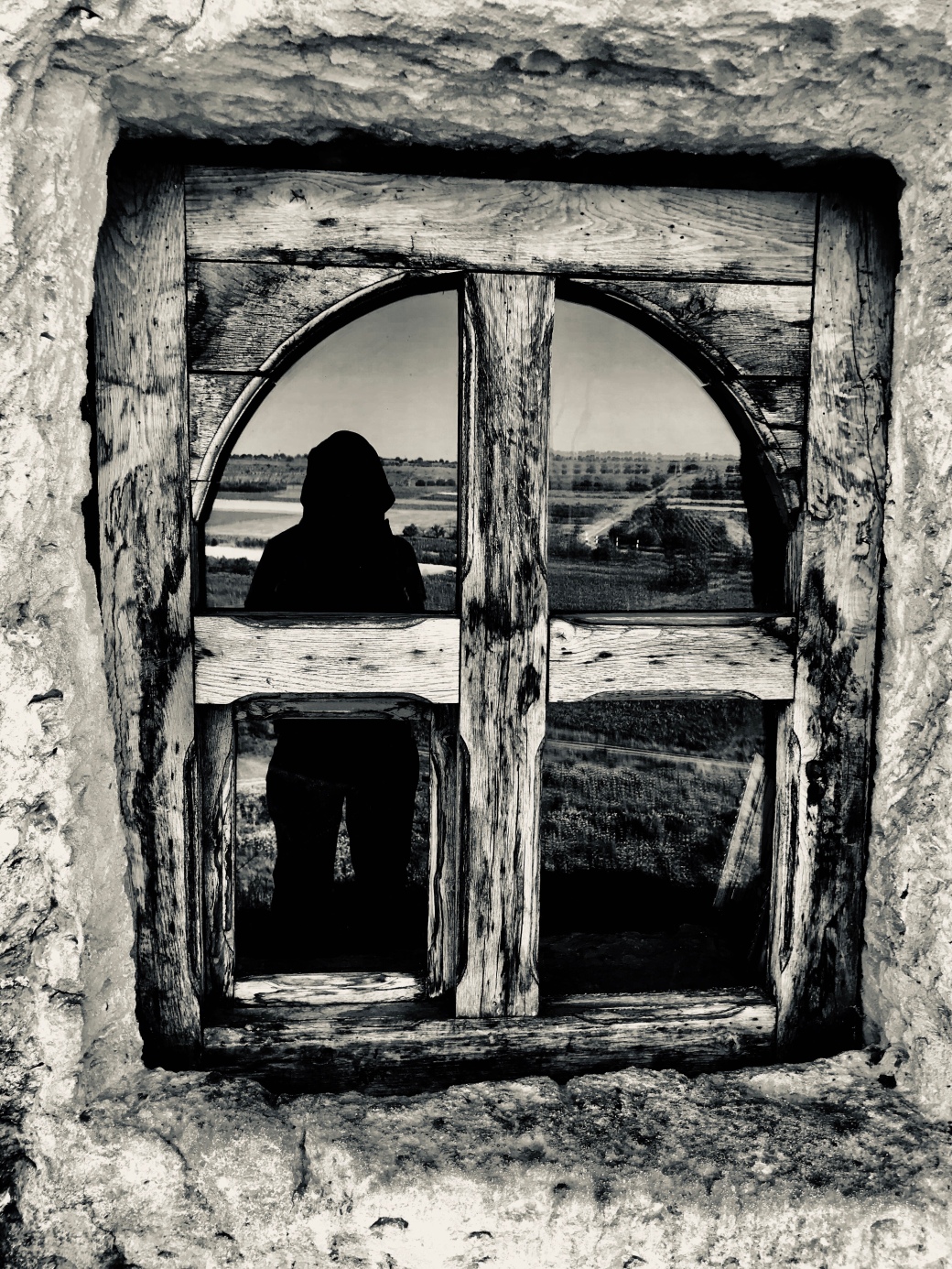 It all has a rather pagan feel and when I look at the stone cross I notice the carving of the sun, a pagan symbol of death and rebirth in nature, that often appears on wooden buildings and traditional embroidery. 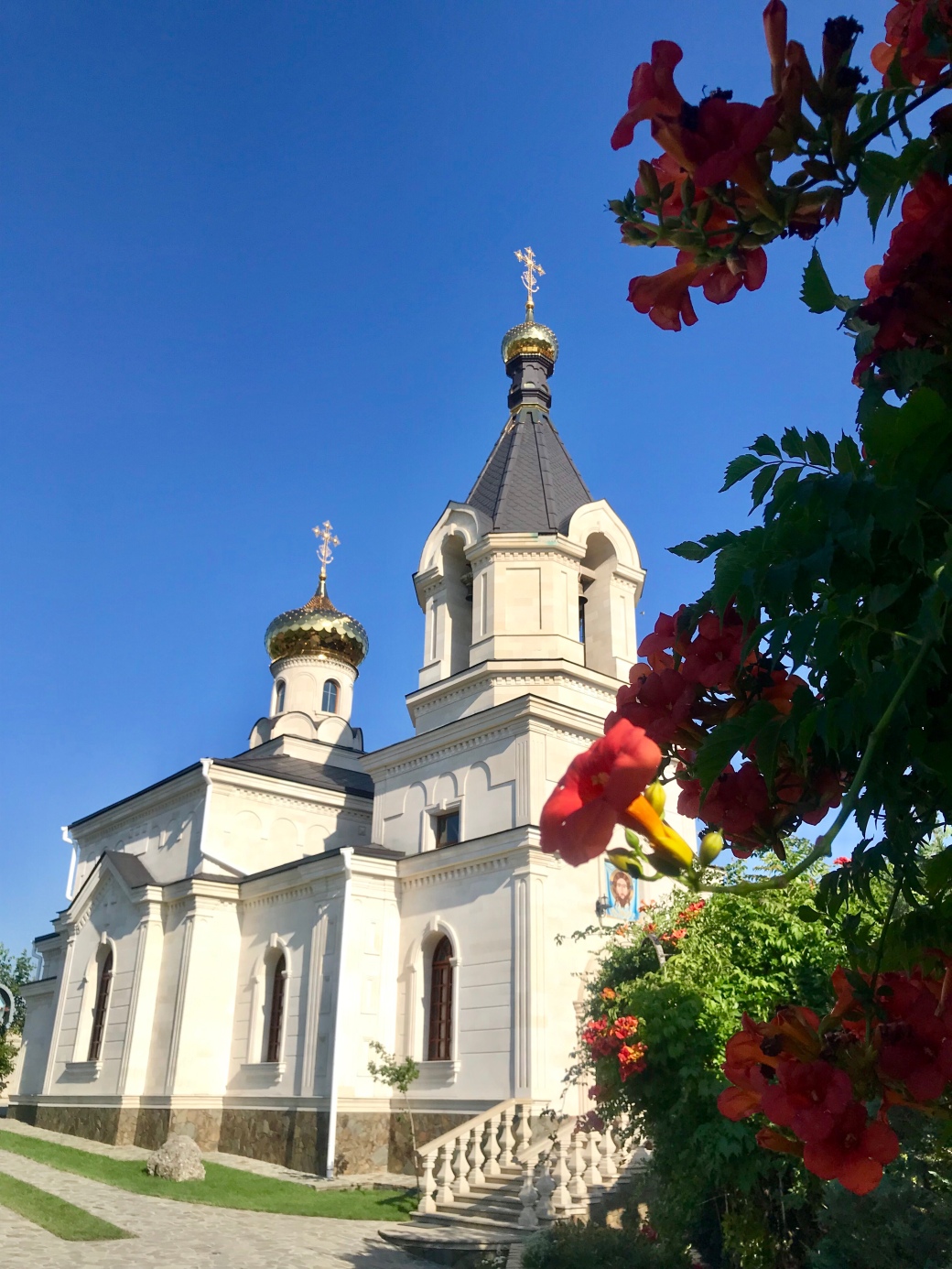 and the nuns less scary.

Still, we are ready for some earthly fun! WINE!

One thing Moldova is known for is wine and even more so wineries. The two big ones are Milestii Mici and Cricova. The former brags with a Guinness Guinness World Record for storing the biggest wine collection with a whopping 2 million bottles in total and the longest wine tunnels in the country, with a total length of 200 km. The later, established by Stalin, is the producer of Moldovan sparkling wine of choice for all and any celebrations. Russian President Putin celebrated his 50th birthday here. Perhaps he was not quite satisfied with his fête as in 2014 Russia imposed embargo on Moldovan wine. Well, it was really in retaliation for Moldova making moves towards joining the European Union. I wonder if Putin still keeps his collection of wines there? His wine is in good company as German Chancellor Angela Merkel, ex-US vice-president Joe Biden, Belarus President Alexandr Lukashenko, Ukrainian President Petro Poroshenko and the Romanian royal house all have their own private collections at Cricova. Keeping politics and organized tours aside, we decide to visit the oldest winery, a small establishment Chateau Purcari. 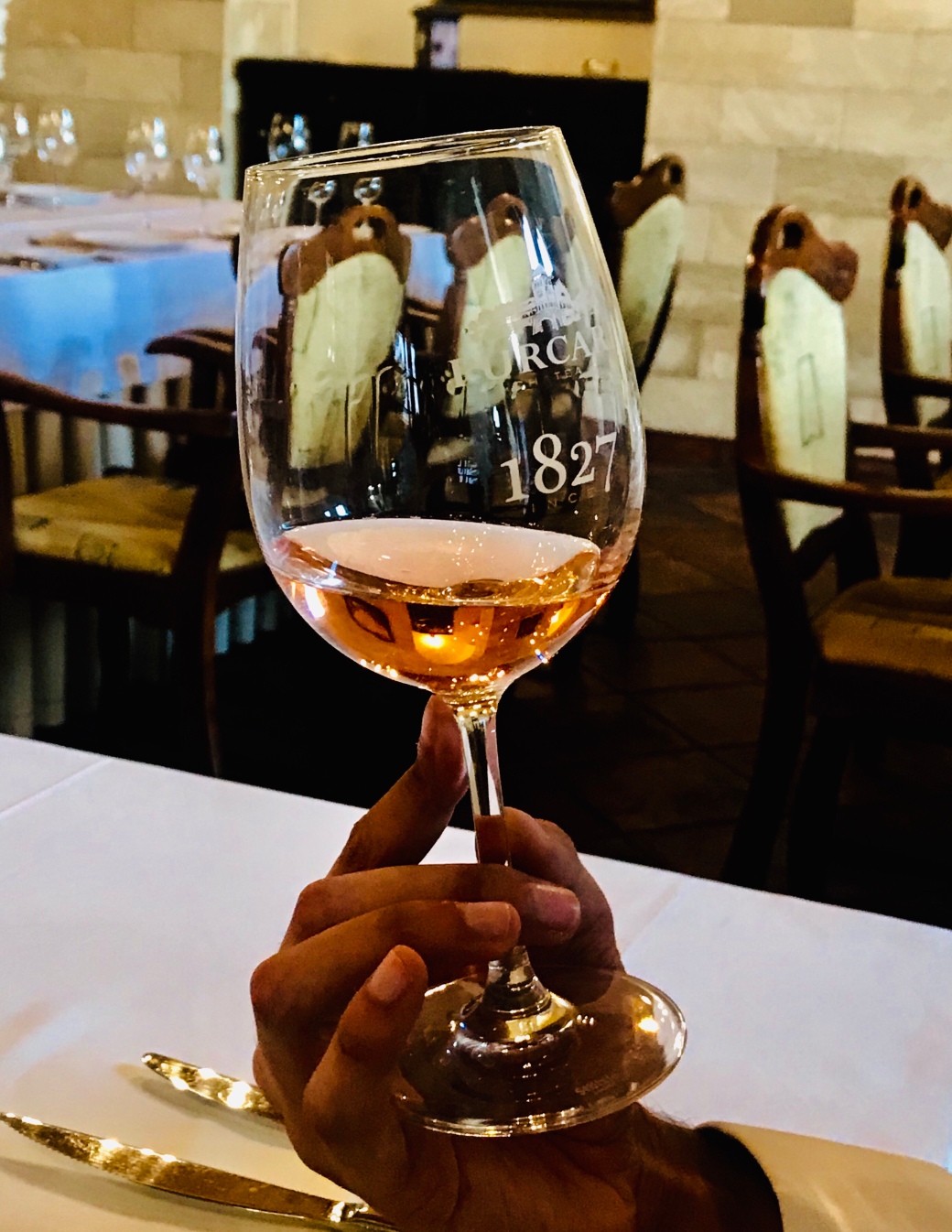 It is supposedly the best Moldovan wine and after drinking it, you can just stumble upstairs to your boutique accommodations. It is said that Queen Elizabeth II still regularly orders the 1990 vintage of their famous ruby red.

As per usual in Moldova information is lacking and while online reviews all mention a tortuous long road to get there, no one mentions which way to get there. Maps.me gets us in trouble again! We head southeast from the capital and past the airport the road deteriorated pretty fast. We decide we will go the longer way seeing that that road on the map app is bigger. It will bring us through Bender, the last city on the Moldovan bank of Dniester River. The river should be the de facto border with Transnistria or officially Pridnestrovian Moldavian Republic, recognized only by three other mostly non-recognised states of Abkhazia, Artsakh (known also as Nagorno-Karabakh) and South Ossetia.

Oops, there are some guys in strange uniforms and this time they have a ramp closing down the road. This time our rudimentary Russian and pointing to the map and mimicking drinking wine gets us nowhere. We are told in no uncertain terms that we need to turn back. Scary to think these militiamen control swaths of Moldovan territory. What stops them from rolling on towards the capital?

We ask the question of the team restoring a small church in a nearby village.

“Uh, we are Romanians on a short term project here. It’s a bit scary and all in all the conditions are really tough here. But come see the restoration in progress. Just no photos inside.” It is the American $$ at work, and painstaking work it is restoring the damaged frescoes.

“Why is the church dug into the earth?”

“The legend says the church was built during the rule of the Ottoman Turks and they would only give permission if it was no taller than a man on a horse. So they had to dig down.”

There is another interesting legend that says the Turks stabled their horses in the church, only to find them all dead in the morning. They believed the saints on the walls have stricken them dead, so they gauged out their eyes on the frescoes.” A very nice story but certainly not universally applicable to thousands of damaged frescoes all over the Balkans.

When we finally arrive at the winery, we are relieved, but the welcome is far from warm. As much as the winery seems to look to the West in design and technology, the staff still lives in the Soviet East with their language skills and attitudes.

Luckily our sommelier and winery guide is a friendly and funny chap. It is only his first week on the job and what he lacks in experience, he makes up in enthusiasm. 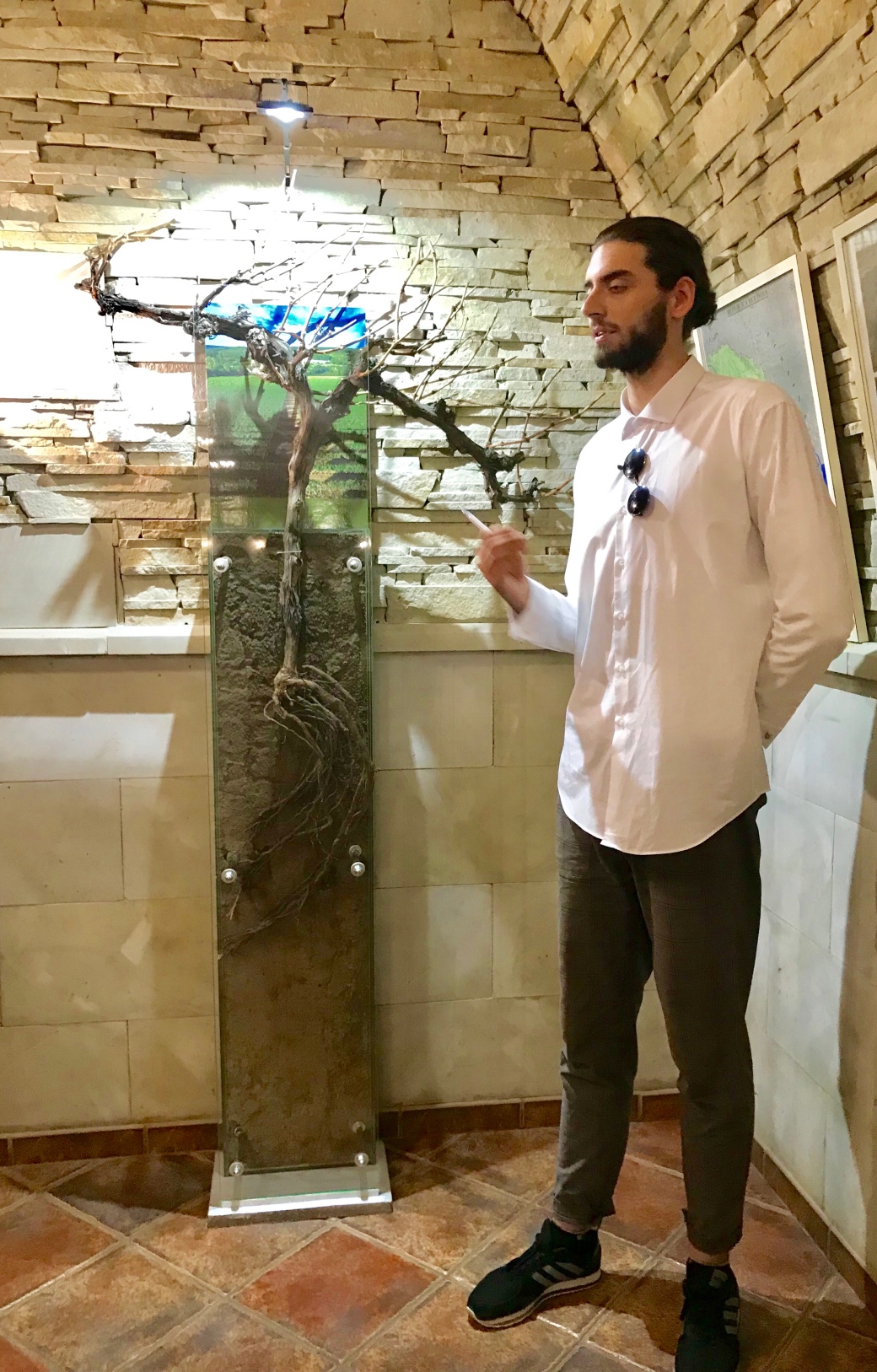 After a short tour of the cellar, originally built by monks in the shape of a cross

I am, as usual, particularly interested in the local varietals of wine like Feteasca Alba and Negra. I am surprised to find an old friend from Caucasian Georgia here – the Saperavi.

It is the most unusual tasting I have ever done in my drinking history all over the world.

Here the sommelier not only pours you a taste, but drinks with you. Yes, I say drinks, because we are not only taking a sip, and nobody spits, but you drink the quarter glass or so. As the time goes by the amount of bottles mounts. 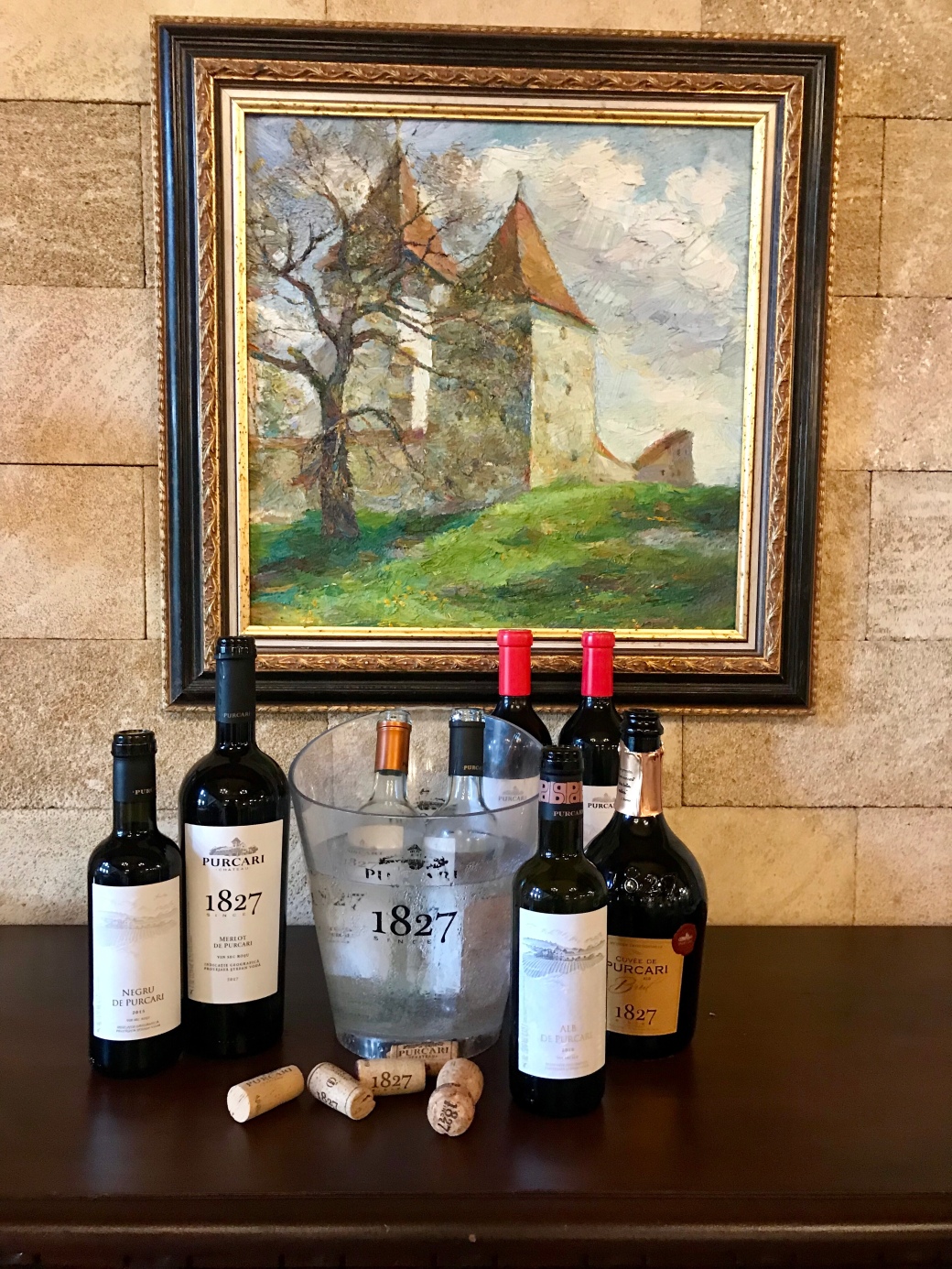 The mood becomes more exuberant. A bottle is rejected because the cork doesn’t smell quite right, the server is yelled at because she has not uncorked the reds on time to let them breath sufficiently. It all culminates in a grand sweep of the sommelier’s arm that knocks over a glass. The one sober participant, my non drinking husband, valiantly jumps in and starts spreading the salt over the spill to save the tablecloth.

We end up with quite an artistic rendering on the white canvas. 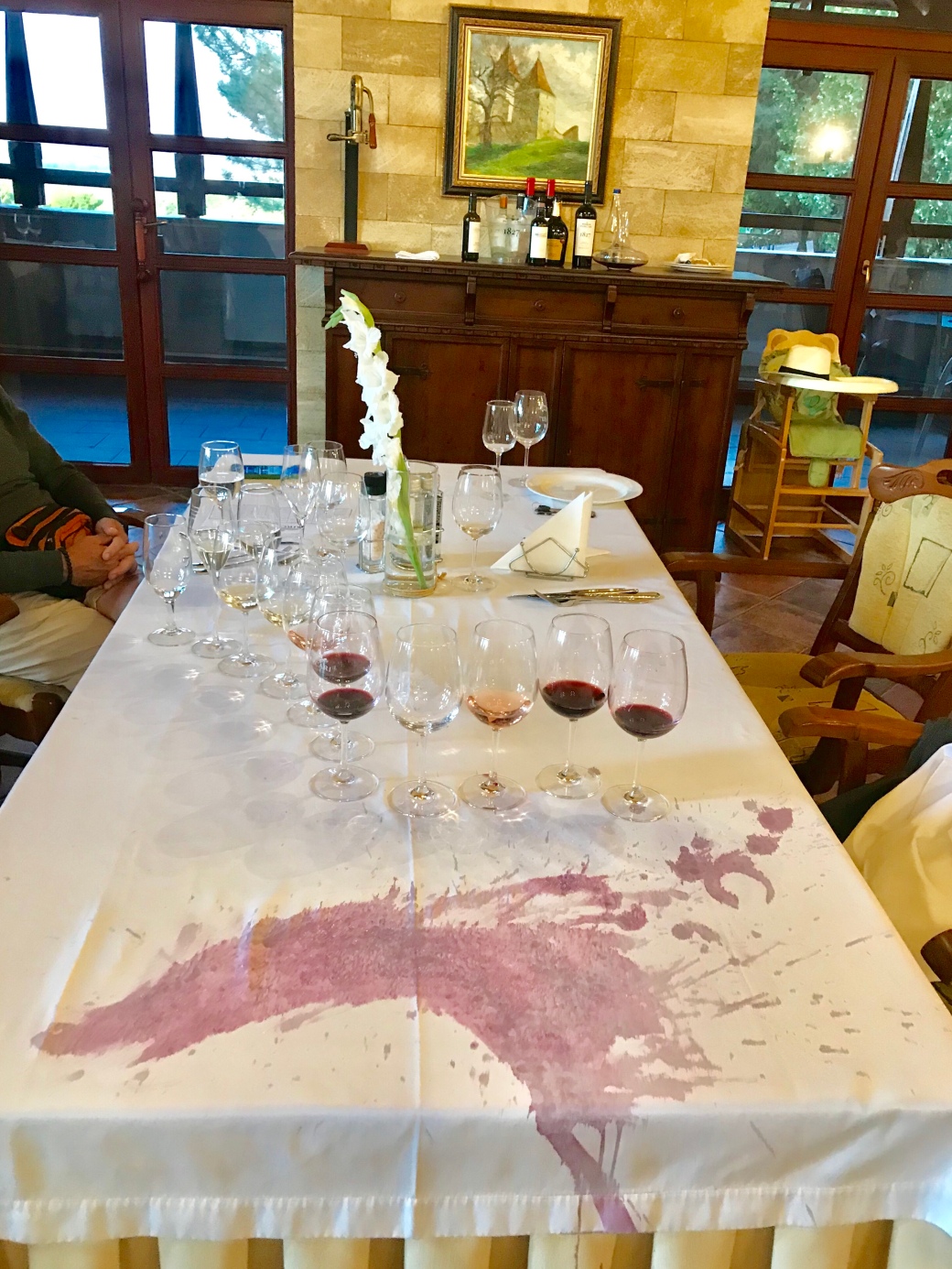 I learn that after the tasting the customers are supposed to take home the bottles with the remaining wine. I just grab the bottle of the sparkling white, it will do great for a mimosa for the next day’s breakfast.

After breakfast we say goodbye to the vineyard

turning north. It is a small country with largely untouched countryside.

There are vast fields of sunflowers and stretches of freshly plowed blackest soil we have ever seen. There is barely any traffic so even on bad roads we can cross Moldova in a day and get to the northern border with Romania by the evening. Just beyond those traffic signs is the border crossing.

At least now we know what we can expect. Information is king. Nowhere more so than in independent travel.

9 thoughts on “Mucking Up Moldova”