Despite all the dire objections we read and heard about driving to Tusheti, at the end, we had to trust a local.

We were talking Nino, the proprietress of our wineyard hotel, about the road to Omalo in the remote Tusheti Region on the Georgian border with Chechnya and Dagestan. It is always put on any list of the 10 Most Dangerous Roads in the World. It is about 72kms/45miles long and it takes you over 2,926m/9,600’ high Abano Pass, open only during the summer season from mid-May till mid-October. Google Maps was not encouraging. 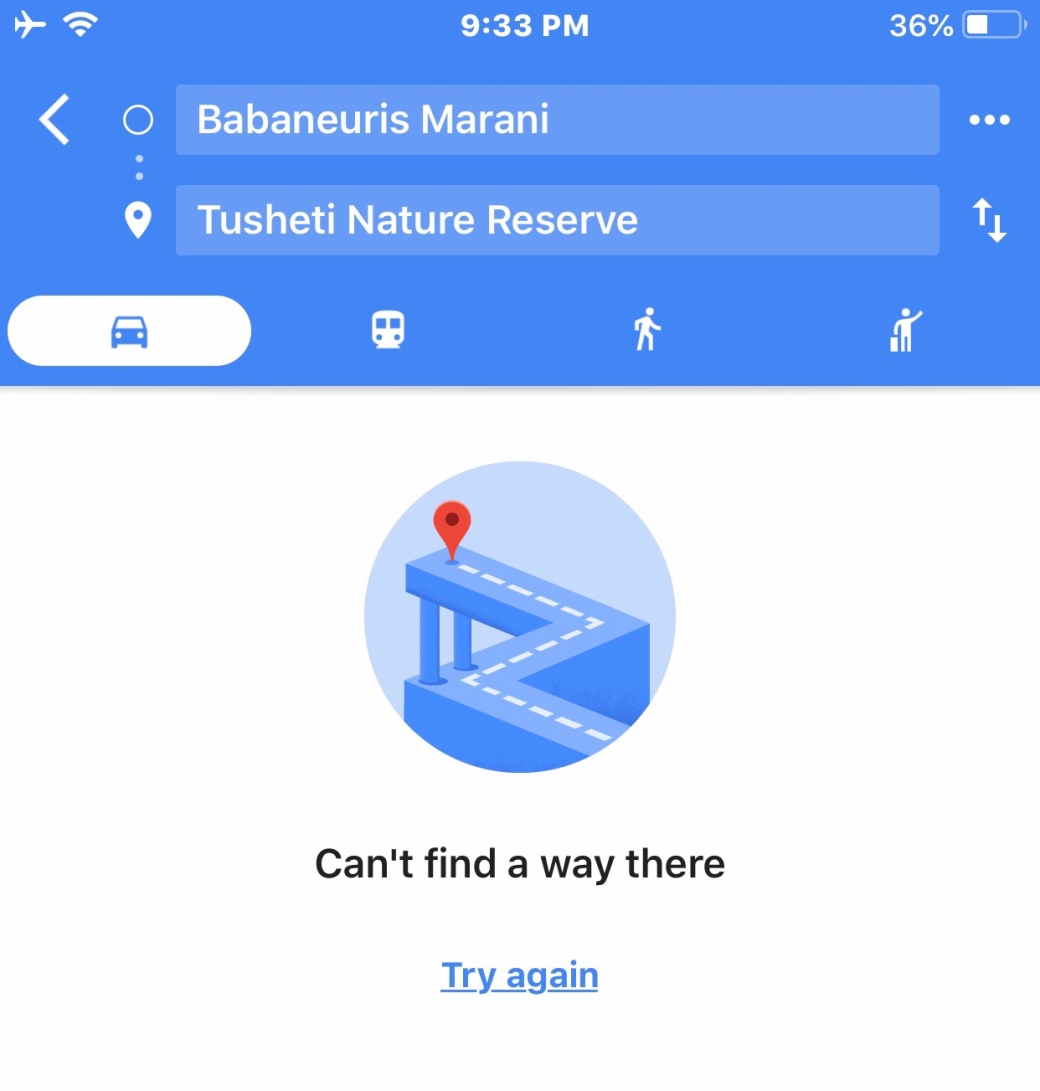 We repeated all known impediments, but Nino just laughed them off and said, “Well, if the road over the pass is not too dangerous for me and my kids to go up every summer and visit my husband’s family, you can go, too. Just don’t drive yourself. Let me find you an experienced local driver!”

We decided to abandon the plans for the rest of our trip and give Tusheti a try at least for two days and one night. Our new Czech traveling friends Míša and Jirka were willing to do the same and go up with us. 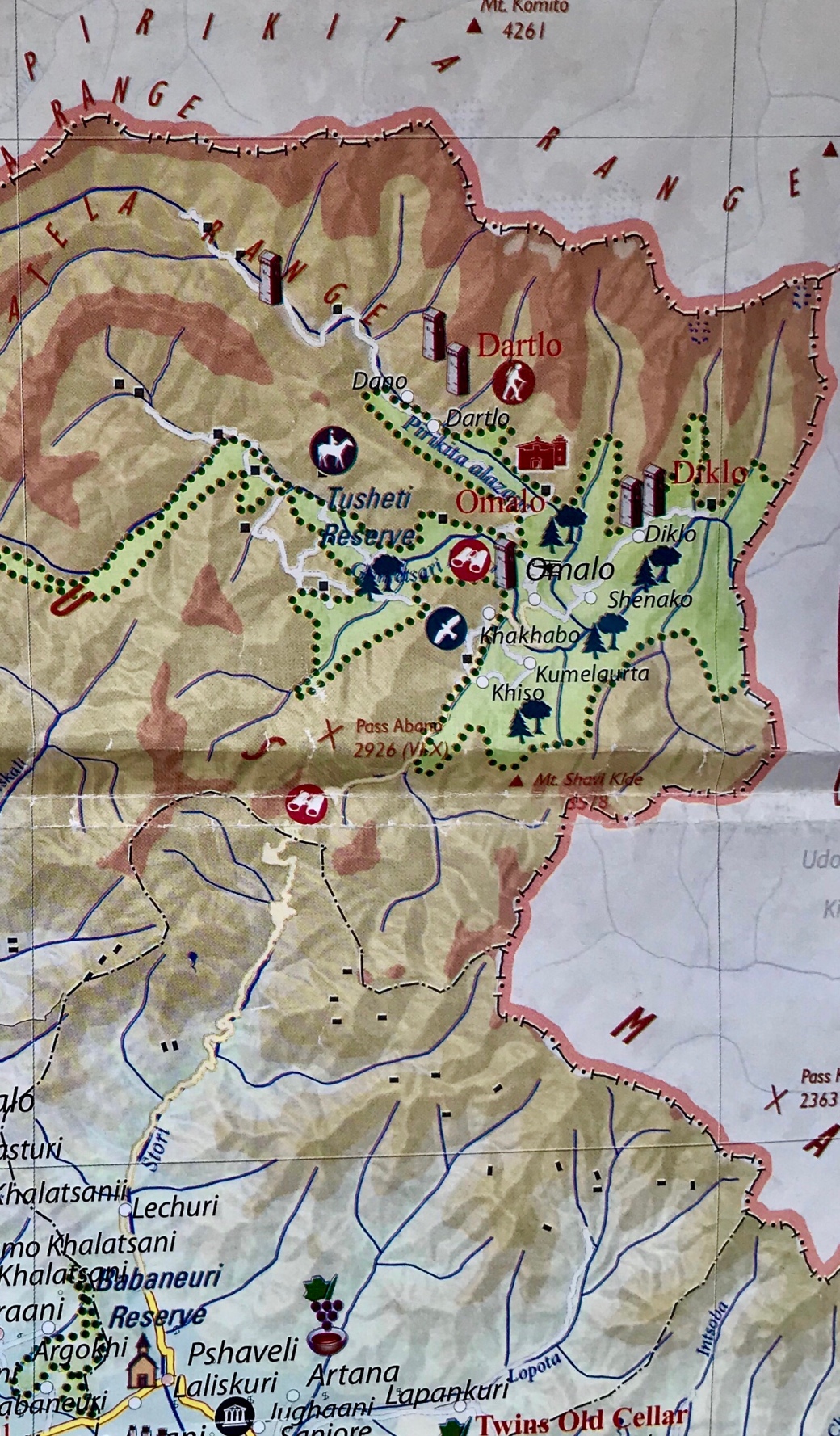 Then the rains came. If the road is dangerous in sunny weather with plenty of water flowing on the path of traffic from regular waterfalls and streams, in the rain it was really impossible.

We arrived to the hotel on a gray Tuesday, and weather forecast was getting only worse with plenty of rain coming down on Thursday. Our Czech friends could wait no longer and left for the airport.

With our own Monday departure for Istanbul looming, every day passing towards the end of the week made us more depressed. Finally, the window of opportunity opened up as the weather forecast for Omalo showed the rain tapering off through Friday night and possible improvement during Saturday and blue sky on Sunday!!!

– a rather surprising, but frequent local transportation choice, to get us safely there and more importantly safely back.

“Don’t worry,” was Nino’s sendoff. “There will be sun waiting for you on the other side!”

I wasn’t quite sure if I could believe her as we started climbing up enveloped in low clouds. The river in the gorge to our right was running fast and full and deep potholes were still sloshing with rain water.

Quite soon we were stopped by the multitude of sheep

coming down from the summer pastures.

We consulted the shepherds on the road conditions up ahead.

We continued climbing steadily. I distracted myself by keeping track of turns and conditions, writing them down in my cellphone for a German professor that had been corresponding with me, his big wish to drive the pass, after two trips through Georgia, still unfulfilled.

After fording the water spilling over the road,

we stoped to admire the waterfalls.

I am not easily scared and I don’t suffer from fear of heights, but a few times I must admit I felt some trepidation as I looked at the narrow strip of earth we travelled on, flanked on one side by peeling layers of slate spilling over our roadway, and on the other side crumbling soil eaten away by water, dripping a thousand meters down.

Ooo, and here comes a truck laden with hay and a friendly guy leading a horse on the very edge of the road, 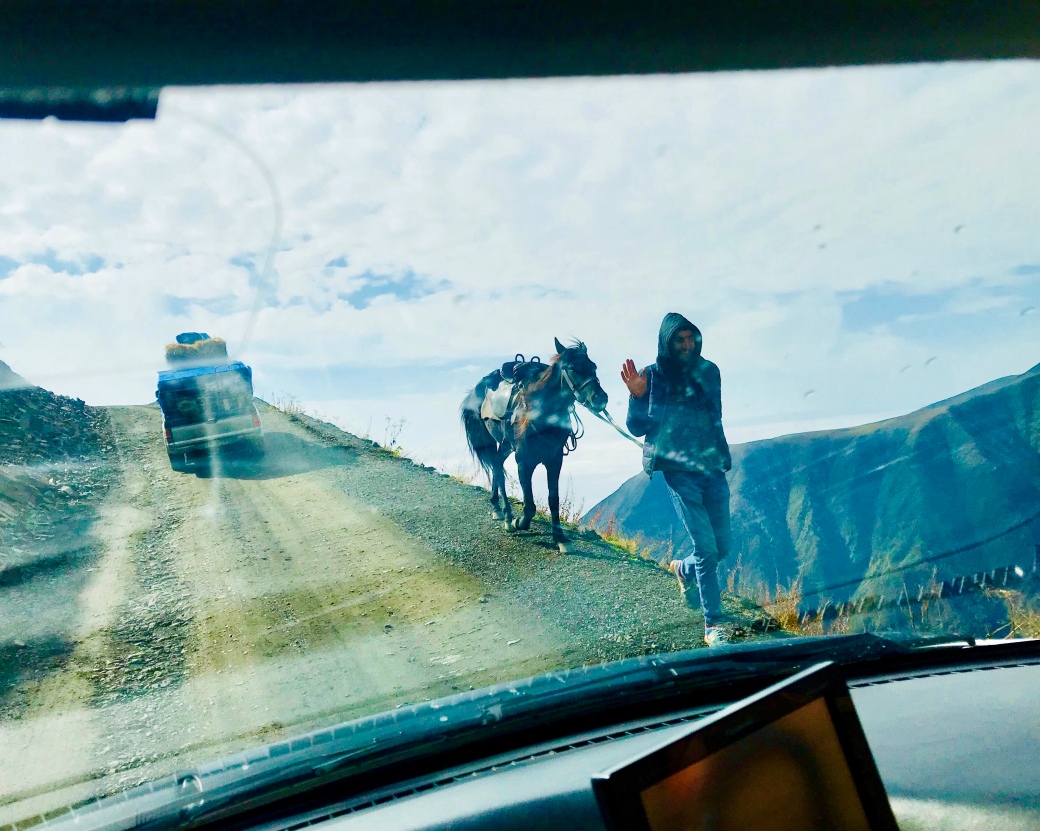 or a bulldozer pushing the debris to the side. I checked my seat belt and held to all available handles.

“Why don’t you wear your seat belt?” we asked our driver in mixture of Russian and hand gestures.

Not a very encouraging answer especially when you just passed yet another granite marker to accident victims, pretty much all male. Some had lovely portrait etchings and even a bench to sit on and a few bottles of chacha stacked up to toast the unfortunate drivers. It seems contraindicative at best to drink to the memory of someone who quite possibly had a few too many at the time of his fatal accident, but then we have told you about the suicidal Georgian drivers and the tradition of toasts. (see previous post on Driving in Georgia).

Half way up we burst through the clouds

to a spectacular view.

About 3 hours in we crested the Abano pass. As expected it was desolate, windy, and chilly at nearly 3000 m. We said a quick hello to two construction workers building a simple stone church of Saint George, and started our descent. If the road was a little wider on this side, it was also steeper with even sharper hairpin turns. 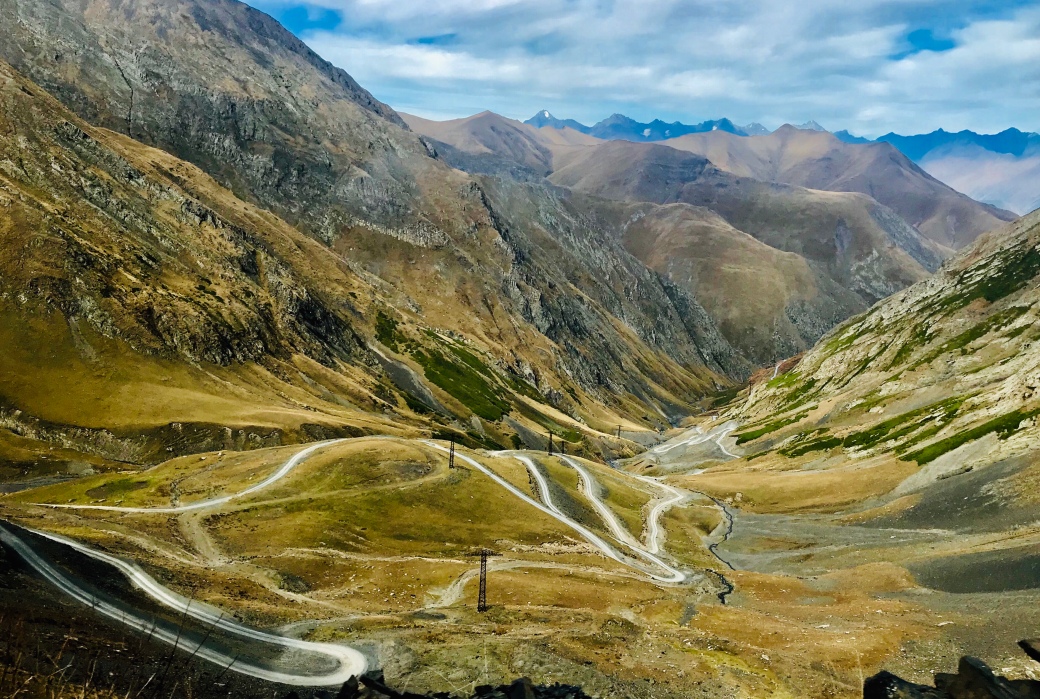 Not any easier to confront the herds of cows and local cowboys going home for the winter. 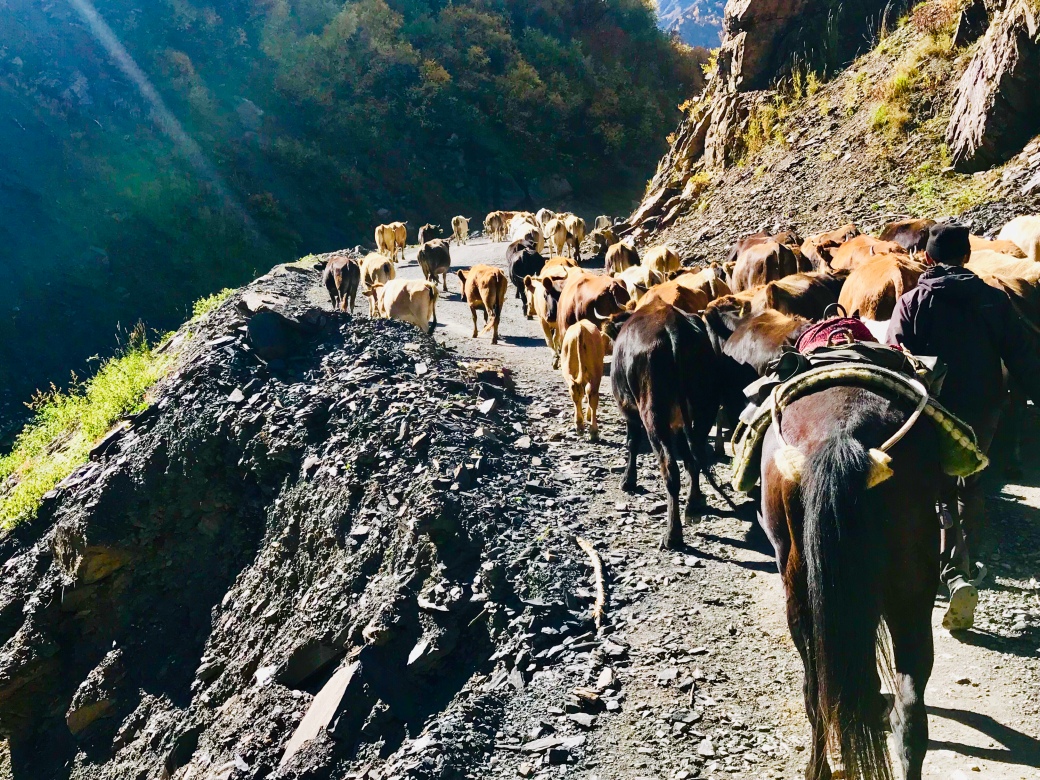 But the hours went by quickly, a new view at every turn, accompanied by the lively Georgian music looping again and again on the driver’s CD player. It contributed to a heightened sense of unforgettable adventure with all our senses sharpened.

Our final destination, the village of Upper Omalo where we arrived after four hours of driving was a joy to behold.

Nino was absolutely right. There was sun in the blue sky warming up the old stone houses and tall towers amongst the trees glowing in yellow fall foliage. Most have been repaired and some turned into guest houses. The first one we asked for lodging in was in the process of packing up for return to the valley. But the next one, Gordila, was still in operation for another few weeks.

It was just opened this season and we were shown to a little wooden room with private bathroom and fresh white comforters. We were the only guests and we were plied with food, tea and attention from two women–a young student and an older cook. She shared her disdain for Russians and love for English language. After dinner we made a fire in the little rusted stove we taught her to play gin rummy and she told us her secret love story.

Our next door neighbor was a local Tush professor of history and archeology that suffered from sciatica. I showed him some stretching exercises and was fairly shocked when in the morning he greeted me with a huge smile,

called me his witch-healer and exclaimed he felt so much better that he could walk up to the top of the hill with us and show us his tower museum with old statues going back millennia. Though Christianized, Tush people still worship some of the ancient deities of Sun and Moon and follow old folk traditions.

In our short stay up the Tusheti mountains I had one of the most magical horse back rides in my life. (See post on Caucasus Mountain Magic)

Before attempting the challenging drive back we took a morning drive to a side valley to visit Dartlo village – one of the most remote and beautiful villages in all of Georgia.

What a perfect ending of our Georgia Adventure.